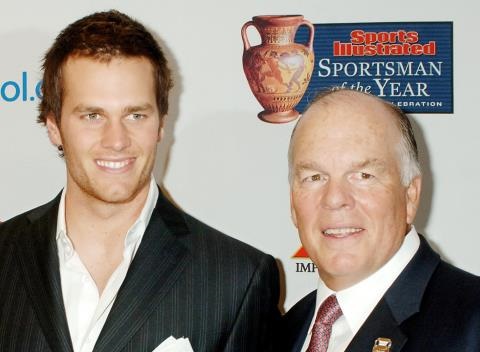 Tom Brady's father, Tom Brady Sr. has come to Peyton Manning's defense in the wake of the HGH allegations pegged against the Broncos quarterback.

Brady Sr., whose son is no stranger to ridiculous controversy, doesn't like how some people have criticized Manning for cheating when there's no hard evidence.

“It bothers me that people are trying to pile on Peyton Manning,” Brady Sr. said. “Until there is hard evidence don’t do to Peyton what they did to Tommy last year, pile on without proof and evidence. It’s unjustified.”


Echoing Steve DelVecchio of Larry Brown Sports, it's easy to understand where Brady Sr. is coming from, but Manning's situation when compared to Brady Jr.'s is a bit different. Brady Jr., who had a clean record until Deflategate (and still does, IMO) was automatically labeled as a cheater because of Spygate, even though he had nothing to do with it. Manning has also had a clean record (and also still does, IMO) to this point. To anyone's knowledge, Manning's name has never been involved in any other potential cheating scandal in his career.

Of course Manning has denied the allegations against him, but the media coverage on him hasn't been nearly as aggressive as it was when it came to Brady Jr.

Even so, Brady Sr. is rooting for Manning to go out on top. Many believe Super Bowl 50 will be Manning's final game, which means tons of people will be rooting for him to go out as a champion.

“If Peyton wins this thing that’s great,” he said. “He’s going out on top.”


Brady Jr. and Manning's friendship is well documented, so you can bet that the Patriots' quarterback is going to root for Manning too, even if he doesn't make it public knowledge.

Brady Sr. also had a few things to say about the NFL's "spot checks" performed this season to make sure PSI levels were within regulation.

“That’s laughable. It’s just laughable,” Brady Sr. told Christopher L. Gasper of the Boston Globe. “I don’t unfortunately think it was in the league’s best interest to release something that exonerated Tom. All the rest of it is nonsense. It’s air.”


When someone in your family is going through a difficult time, it affects everyone. Deflategate was no different for the Brady family, but it looks like they're ready to move on.

“My wife and I have decided as much as it affected us last year, we’re not going to let it affect us moving forward,” Brady Sr. told Gasper. “We’re trying to forgive an obvious plastering of our son’s reputation. We’re trying to say, you know what, forgive and forget. As a Christian, it is eating me up inside. It ate my wife up. It’s hard to do. It’s easy to be bitter.”