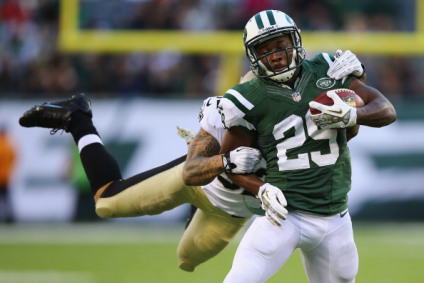 Another Patriots running back target is off the board. Bilal Powell has re-signed with the New York Jets, according to ESPN's Adam Schefter. The Jets are now set in their backfield with Powell and Matt Forte, who signed with New York yesterday.


A Powell-Matt Forte tandem. Heard last night that Powell was getting offers of $4M per. https://t.co/m7dP4LQhCF
— Rich Cimini (@RichCimini) March 10, 2016

Staying on the subject of running backs, former Los Angeles Rams running back Benny Cunningham will visit the Patriots today.

Here are some statistics on Cunningham and his free agent status, per Mike Reiss.


RB Benny Cunningham was tendered at the low level by Rams. If signed to an offer sheet, and Rams don't match, there is no compensation.
— Mike Reiss (@MikeReiss) March 10, 2016

The guess here is that if Cunningham were to be signed, he'd be used as a situational running back who would sometimes return kicks. The Patriots value running backs who can catch passes, and Cunningham can certainly do that.