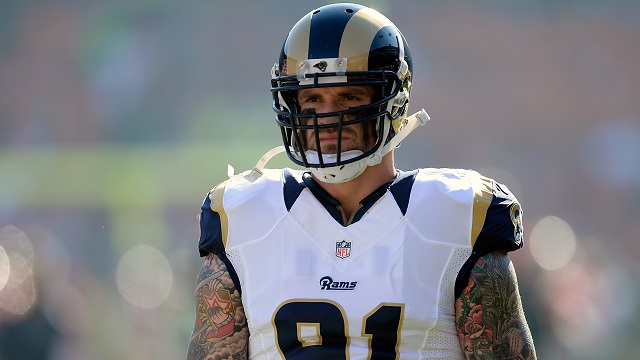 In January 2015, shortly after this Titanic-sized story broke, Long wrote a piece for The Players Tribune where he shared his thoughts on the scandal, the Patriots as an organization and more.

You can read the whole thing here, but we'll share some of the key excerpts Michael Hurley of CBS Boston picked out from Long's piece.

“Let’s get down to it: this story isn’t as much about air pressure as it is about the cult of the New England Patriots. The Patriots are really good at two things: winning football games and not giving a [poop] what you think about them,” Long wrote. “This modus operandi has earned the Patriots an equal number of fans and haters. One thing that drives people crazy is Belichick’s ‘less is more’ school of media engagement. Media relations, after all, is a game. It involves three parties: the teams, the media and the fans. All three groups know it’s a game, but if a player or a coach doesn’t play ball, people get pissed. Bill Belichick is not only a Hall of Fame coach, but he is also the undisputed heavyweight champion when it comes to flustering members of the media. I find it hard to believe Deflategate would be as big of a story without Belichick and Brady as the villains. Anybody heard about the recent Cleveland Browns texting allegations? I didn’t think so.”


“So if you believe Tom and Bill have been using deflated footballs, game in and game out, for a decade and a half, why is this the first time we’re hearing about it? That’s all the way back to 2001. You know how long ago that was? The first PT Cruiser came out in 2001. Creed was killing it in 2001. So either the Patriots have been doctoring footballs in every big game since ‘Mulholland Drive’ was in theaters, or they’ve simply mastered the art of winning no matter the conditions.”


“No matter what comes of this, I don’t think I’ll be questioning the Patriots’ legacy,” he wrote. “But that’s just one man’s opinion. Football is a profoundly difficult game. You could pair countless quarterbacks with countless head coaches and give them a bag of magic footballs and they’d still struggle to win a playoff game. Tom and Bill have won 20 (a record), with an ever-changing cast of characters in an ever-changing league. … I know this for sure: the most perfect, pristine footballs of all time will be flying around that field in Glendale, Arizona this weekend. If the smoke clears on Monday and the Patriots are world champions, my hope is that everyone will appreciate the Patriots for sustaining one of the great runs by a franchise in league history.”


Long has said and done all the right things since being signed, and it wouldn't shock me if he becomes a fan-favorite in New England. His takes are logical and should be well-received by the fans. Long and the Patriots won't say anything further on Deflategate, and why it's still going on is utterly ridiculous.

Long made additional headlines last week when he tweeted that his jersey number could be 95. That number was most recently occupied by Chandler Jones, who is now a member of the Arizona Cardinals. Long apparently spoke to Jones about wearing the number.

It speaks volumes to the type of guy Long is to ask Jones, who is pretty unlikely to go down as an all-time great Patriot, to wear 95. No disrespect meant to Jones whatsoever, (I've always really liked him as a player and still do), but Jones' career in New England doesn't necessarily warrant a current player asking a former player to wear a number they once occupied. Even so, it's truly a great gesture and sign of respect.

Jones, meanwhile, may still have New England on his mind. During his introductory press conference, he said he was looking forward to playing for the "New England Cardinals." Problem is, that team doesn't exist.