Bill Belichick is in mid-season form at NFL owners meetings 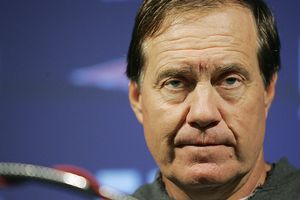 This morning, Belichick had a hilarious moment where he literally pushed a bunch of microphones away that were directly in front of him.

He did, however, have some interesting things to say about past and present Patriots players, the league possibly playing games in China and Germany and more.

On Jerod Mayo, per Mark Daniels of The Providence Journal:

“I’ll start out this morning, first of all, to talk about Jerod Mayo,” the Patriots coach said. "I talked to Jerod a few weeks ago. He told me about his retirement. There have been very few players in my career that I’ve had the opportunity to coach that I’d say had more of an impact on a team than Jerod has from day one, which is unusual. From the first day he walked in the facility, which was his pre-draft visit, after we drafted him in 2008, he’s been a pleasure to coach, a great addition to our team, both on and off the field. I’m sure I learned a lot more from him than he did from me."

“Free agency has been like it usually is,” Belichick said. “There’s been some movement there like there has been with every team, so as always, we’ll try to do the things we feel are best for our football team to be as competitive as we can. That’s what we’ve always done. That’s what we’ve done this year. That’s what we’ll continue to do. There hasn’t been any change in anything that’s going on. It’s just working through the process.”

"I’d say the same thing about all the players we acquired," Belichick said when asked about Hogan. "We did things we feel like would help our football team. We’ll see how it goes."


On other acquisitions, including Martellus Bennett, Jonathan Cooper and others:

“It’s free agency. Some players change teams in free agency,” Belichick said. "Other players, [Martellus] Bennett, Jones, so forth, change in trades. It’s all part of the process.”


“All the players that we added we feel like have an opportunity to help our team,” Belichick said. “We’ll see how it goes.”

“That’s probably a comment for another time, but I’ve said many times there is no quarterback I’d rather have than Tom Brady,” Belichick said. “He’s my quarterback. So I’ll stand by that.”


On Robert Kraft sending a letter to Roger Goodell asking for the Patriots' draft picks back:

“I think he covered it,” Belichick quipped.


And finally, here's a great photo of Belichick being himself.


That's it. This about sums it up pic.twitter.com/buOrAyjIsE
— Mark Daniels (@MarkDanielsPJ) March 22, 2016