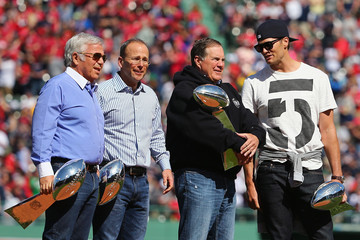 This'll go over well with folks around New England, but probably not with the rest of the country.

Patriots president Jonathan Kraft, as you would expect, has been backing Tom Brady throughout this mess called Deflategate. Kraft stuck up for his quarterback again at the NFL owner's meetings, saying Brady is one of the best things about the league.

Per Doug Kyed of NESN:


“Tom Brady is the poster child for everything that is right,” Kraft said to CSNNE.com’s Tom E. Curran on Tuesday. “Not just with the NFL, but with professional sports in general and why we wouldn’t be looking to be putting somebody like him on a platform and effectively showcase him as everything that is great about a professional athlete.

“Both in terms of his work ethic, his discipline on the field, how he is as a father, as a husband and what he does in the community, he is everything that is great about the NFL and professional sports and to see what has happened to him, at least for me personally, as somebody who is fortunate enough to know him and have him as a friend, that is probably even more disheartening to me because he doesn’t deserve it.

“And you throw the first-round pick into it, it gets very frustrating and very angry and disappointing, but at some point you have to realize, you have to turn the energy and attention towards things that will be productive. The league meetings start really the 2016 season and for us, we have to go out and have a very successful year.”


At age 38. Brady had one of the best statistical seasons of his career in 2015. The future Hall-of-Fame quarterback threw for 4,770 yards, 36 touchdowns and seven interceptions.

He's still dealing with Deflategate in court, though. Earlier this month, Brady's legal team squared off against the NFL's counsel in an appellant court. The meeting was an attempt by the NFL to reverse a decision made by Judge Richard M. Berman to eradicate Brady's four-game suspension for the scandal.

While a decision isn't expected for a while, Brady is one of the biggest faces, if not the biggest face, of the league. His jersey was the top-selling jersey this year and the media follows his every move. Whether or not he sits for four games, one should not expect his production to decline at all.