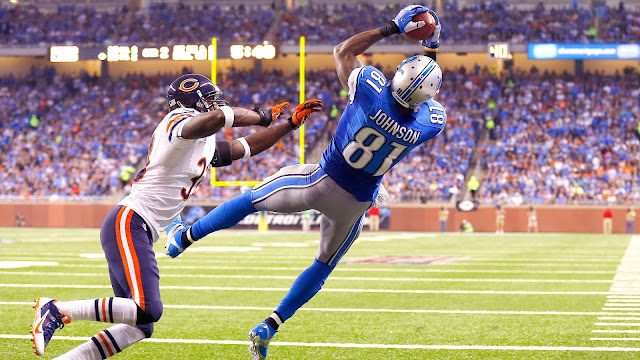 Long-time Lions wide receiver Calvin Johnson retired earlier this offseason after a stellar nine-year career without a Super Bowl title. For as dynamic a receiver as Johnson was, many people were rooting for him to win a ring, and there apparently still people out there who want to see it happen.

Johnson's former teammate Nate Burleson, who now works for the NFL Network, pleaded for Johnson to come out of retirement and join the Patriots so he could have a shot at winning a title.

After profiling Johnson's career in a piece for NFL.com, Burleson ended with the following:

Congratulations on your retirement, man. Now, take this year off ... then find a way to land with the Patriots and get a championship ring. You deserve it.


It's not a complete surprise to hear Burleson say this when one considers that Johnson had been linked to the Patriots earlier this offseason. If Johnson were to unretire, however, he'd still be under contract with Detroit. So the Lions would have to cut him or trade him if he ever decided to come back and try and link up with Tom Brady and Bill Belichick.

Johnson, 30, definitely began to see his skills diminish last season, but he would still be a very big threat on any team. If he were to join the Patriots, he'd give them the kind of deep threat they've been missing since Randy Moss. But again, this is a pipe dream. It sounds like Johnson is retired and is going to stay that way.

When he retired, Johnson said the following:

"After much prayer, thought and discussion with loved ones, I have made the difficult decision to retire from the Lions and pro football. I have played my last game of football."


Of course, things could change. Just look at guys like Brett Favre, Roger Clemens, Michael Jordan and so many others who retired from their respective sports and then came back to play a few more years. Johnson could certainly do it physically, but whether or not he would consider it is another story.