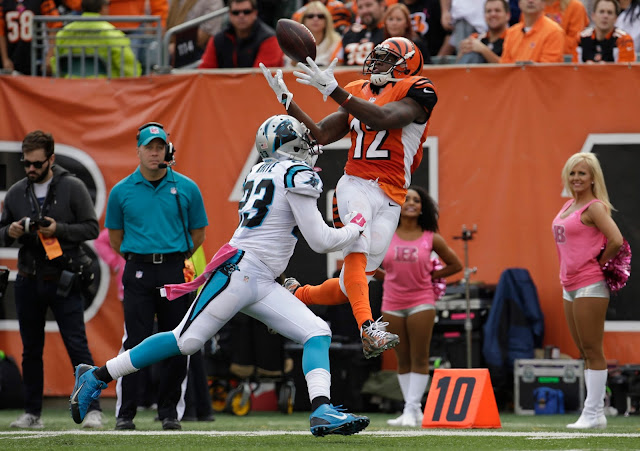 For years, Patriots fans have clamored for a big-bodied, big play receiver. It was a weakness that was plainly evident in their AFC championship game loss, as the since-released Brandon LaFell was a non-factor and former second round pick Aaron Dobson was once again sidelined due to injury.

If today's reports are any indication, the Pats are poised to spend some money to fill that need. First comes this report from Michael Silver on former Bengal Marvin Jones, widely viewed as the top free agent receiver on the market.

Jones ultimately signed with the Lions, where he'll be tasked with filling a Megatron sized hole in their lineup. Given that he was reportedly seeking $8 million per season (contract terms have yet to be reported), it's surprising that the notoriously stingy Patriots were in the mix. Price was apparently an issue between them and former Browns speedster Travis Benjamin as well. According to the ProJo's Mark Daniels, the Pats were interested in Benjamin but ultimately balked at the numbers that led him to sign with the Chargers.

However, the Pats remain very much in the mix for two intriguing, big-bodied pass catchers: Mohamed Sanu and Rishard Matthews. Sanu is particularly intriguing, as the Boston Herald has reported a mutual interest between the two parties. A Bengals third round pick back in 2012, the 26 year old Sanu is a big (6'2", 210), twitchy athlete whose run after the catch ability would fit well in the Patriots system. He also has plenty of ties to the Patriots, as his collegiate career at Rutgers overlapped with Devin McCourty, Duron Harmon, Logan Ryan and Jonathan Freeny. The Titans and Giants, two teams with cap space to burn, are reportedly the Pats top competition to sign him.

A seventh round pick back in 2012, the 26 year old Matthews was in the midst of a breakout season last year with the Dolphins before injuries caused him to miss time. In 11 games, Matthews piled up 43 receptions for 662 yards (15.4 per catch) and 4 touchdowns. Prorate those numbers for 16 games, and your looking at a very respectable 69 catch, 1,062 yard, 6 TD line (I used 10 games to figure out the average since he was injured early in his 11th and final game of the season). At 6'0" and 217 pounds, he's another free agent with size and youth on his side. The Titans (remember, their GM Jon Robinson is a Patriots protege) are reportedly also in the mix for his services.

It's shaping up to be a wild first day of free agency. Stay tuned here at PatriotsLife for all the latest updates.