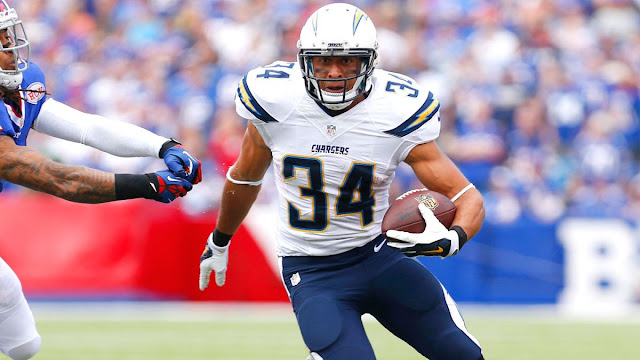 Veteran running back Donald Brown signed a one-year deal with the Patriots earlier in the offseason, giving the Patriots another body in training camp as well as depth at the position. According to Brown, it wasn't a tough decision to come to New England. In fact, a former Patriot, one Danny Woodhead, sold Brown on signing with the Pats.

"It was an absolute privilege playing with Danny. [He’s] just a phenomenal guy, and he spoke very highly of this program so I knew it was a good situation . . . You’re going to be treated as a professional, they expect you to be a professional, and there is a very high expectation there, and that’s what I’m here for and that’s what I’m all about."


One of Brown's best abilities is picking up blitzes and pass protecting, something that the Patriots are going to need a lot of this coming season. The Patriots' offensive line was one of the worst in the NFL last year, and keeping Tom Brady upright is of the utmost importance.

"I take pride in everything I do. You can’t be one-dimensional in this league. You can’t be just a pass-blocker. You can’t be just a short-yardage guy. You can’t be just a pass-catcher. There are injuries in this game. I’ve been a part of games where every running back has gone down. We had to put a tight end in at running back so you have to be ready for any and every situation possible, but I take pride in everything I do when I step on that football field . . . When you work with elite level quarterbacks you are going to throw the ball so you need to protect them. In college it’s a lot different. They hand you the ball every time you’re on the field. Just having that past experience and the importance of pass protection, I mean it’s important. That’s my number one job, to keep the quarterback on his feet and keep him clean."


As it relates to Brady, Brown talked about how it's easy to see why Brady has been as successful as he's been. Brown and Brady haven't spent a ton of time together yet, but Brown had high praise for his new quarterback.


"Just attention to detail, their work ethic, their football IQ, the passion, the love they have for the game," Brown said. "And just in my brief meeting with Tom it’s the same. [He] loves the game, a hard worker, diligent, and that’s what makes him great."


If Brown makes it to the 53-man roster, it wouldn't be shocking to see him on the field often given his ability to pass protect. The Patriots could employ more two running back sets and use Brown as a blocker, or catch teams off guard and use him as a situational runner.