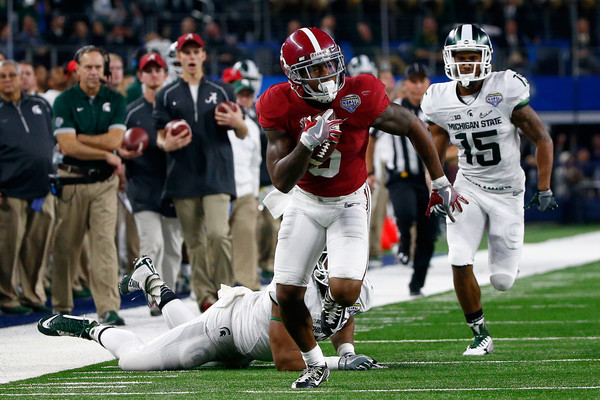 The Patriots may have had to take the first day of this year's Draft off (thanks, Roger!), but they were able to jump back into the action on Friday in the second and third rounds. It took a while for the Pats to be able to submit a pick -- their first pick came at 60th overall, just four picks before the round could end. The third round proved to be more active, as they had three selections. Here is how they fared:

The Pats addressed secondary depth with their first pick in this year's draft, opting for one of Alabama's steadier cornerbacks, Cyrus Jones. At 5-foot-9 and 175 pounds, there's no doubt that Jones is a smaller player, but according to Pro Football Focus, he missed just three tackles last year. Jones is also multi-faceted, as he served as a punt returner for the Crimson Tide, and was named Defensive MVP of last year's Cotton Bowl against Michigan State after intercepting a pass and returning a punt for a touchdown.

The Patriots initially had the 61st pick, but traded down with New Orleans so they could snag Vonn Bell -- a move that also netted the Pats a fourth-rounder. With the 78th pick, they took Joe Thuney, one of the better offensive linemen headed into this year's draft. Throughout his career with the Wolfpack, Thuney has demonstrated proficiency at both guard and tackle positions, and gives the Pats a steady, versatile option on the o-line.

Later in the third round, the Patriots took the man that Thuney was in charge of protecting, Jacoby Brissett. After cutting his teeth with the Florida Gators, Brissett transferred to NC State in 2013, and spent two seasons as their starter in 2014 and 2015. Last season, he threw for 2,662 yards and 20 touchdowns, and guided the Wolfpack to a 7-6 record -- which culminated in a 58-21 loss to Mississippi State in the Belk Bowl. Brissett figures to slot in behind Jimmy Garoppolo on the depth chart, for now.

As a compensatory selection, the Patriots used their third pick in the third round on Vincent Valentine, a defensive tackle out of Nebraska. Valentine has proven to be decent at stopping the run, though his pass rush leaves much to be desired. From Pro Football Focus:

A run-stopping defensive tackle, Valentine posted a strong +21.4 grade against the run the last two years, though he provides little as a pass rusher. With a low run-stop percentage of 3.4 percent (151st in class) he’s more of a hold-the-point nose tackle option rather than a playmaker.


Check back with PatriotsLife throughout the weekend, as we provide coverage on the rest of this year's draft.