Roger Goodell: the NFL playoffs are likely to expand 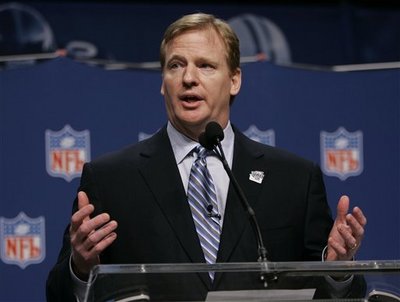 NFL Commissioner Roger Goodell said over the weekend that the NFL playoffs will "likely" expand in the future. How soon or far away that is is anyone's guess considering the topic of expansion has come up every year since 2012 and nothing has been done about it.

In a meeting with Jaguars season-ticket holders (those exist?) Goodell said the following:

"It will likely happen at some point," Goodell said of playoff expansion, via the Jags' official website. "But we want to be really cautious because we really like the balance we have with the importance of the regular season and the postseason."


"It works so well right now [with 12 teams]," Goodell said. "I think that what makes the NFL great is every game means so much. You don't ever want to lose that. You don't want to lose the fact that every regular-season game is important. Only having 12 teams qualify, which is the smallest of any of the professional leagues by far, that's a good thing for us."


The NFL has held the current playoff format for the last 26 years, and should it expand, it's likely to go from 12 teams to 14. How they would sort out having six Wild Card Weekend games is still to be determined.