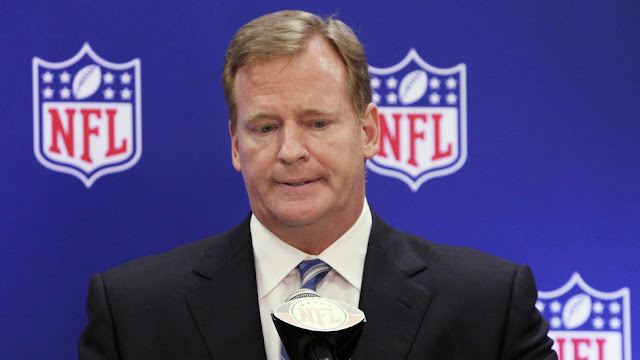 NFL Commissioner Roger Goodell said in an interview with CBS Radio this morning that the appellate court case regarding Deflategate had nothing to do with the actual violation, but rather the rights he and the league had in the Collective Bargaining Agreement.

As a result of the league's victory in court earlier this week, Tom Brady's four-game suspension was reinstated. Brady plans to continue to fight it.

“Well this wasn’t about the actual violation,” Goodell said, after being asked if the endless DeflateGate saga was worth the $20 million the league has spent on legal fees related to it over the past year. “This was about the rights we had negotiated in our collective bargaining agreement, that we had in our collective bargaining agreement, and that we wanted to make sure we retained.”


Goodell contends that when the case was being heard in a district court last summer, the decision should have been the same as the one the appellate judges made. Additionally, he still feels that Ted Wells' investigation into the ball-deflation scheme was completely independent.

“The court was very clear on the fact that the suspension was reinstated, that it should not have been overturned in the first place last summer by the District Court,” he added.


“There was an independent investigation on this, and an independent report that was presented to me,” Goodell said. “And that’s what we based the judgement off of. And then we had a hearing, we had a process that is articulated in our collective bargaining agreement that has been there for several decades.”


Goodell went on to say that he and the league want to move on from Deflategate, but given Brady's apparent decision to continue to fight to have his suspension wiped out for good, it looks like the fight isn't over just yet.

"I think this is the end of the matter. We’re moving on and focusing on the draft.”


While the NFL Draft begins tonight, much will be made about the Patriots not having a first-round pick as part of their punishment from the league. It will no doubt be brought up more than once tonight and over the course of the weekend-long event.