Several Patriots fans are suing the NFL over Deflategate 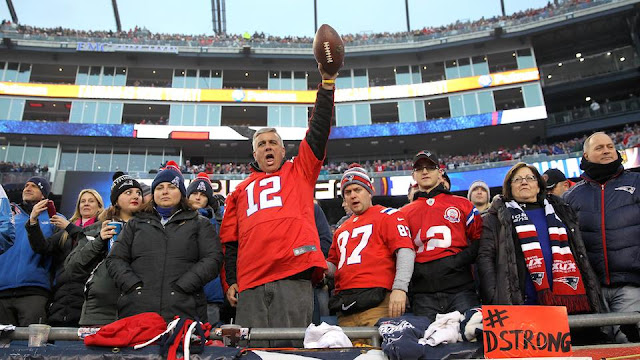 This has got to be the most pathetic BS I've ever heard. Seven Patriots fans are actually suing the NFL over Deflategate. I'm completely baffled by this to the point where I'm not sure whether to laugh at how dumb it is or be embarrassed.

These fans have asked a judge to reverse the NFL's decision to take away New England's first round pick in the 2016 NFL Draft. Their argument is that NFL Commissioner Roger Goodell acted unlawfully, saying the league violated the Racketeering Influenced and Corrupt Organizations Act, which is usually used against mob bosses.

Not only do the fans in this lawsuit sound ridiculous, but so do the attorneys.

Lead plaintiff and Patriots season ticket holder Todd Orsatti, of Bristol, Connecticut, said in the filing that his seven-year-old daughter was so distraught by the league's Deflategate decision that she will no longer go to games with him.

'We are facing a modern tyrant who has used his power in a most un-American way- to purposely, arbitrarily and capriciously hurt the New England Patriots for untoward and unfair reasons. Namely to appease jealous owners and fans of the other 31 teams who the patriots have spanked over the past 15 years.'


I truly hope all of this is a joke. There's 0 chance any reputable court will take this case. The worst part of this lawsuit, besides the lawsuit itself, is the part about the child being emotionally distraught by this whole thing. You're that upset over the punishment given to a football team that you won't go to games anymore? Get over it, kid. It's football, aka a game. No one died.

Someone else wrote that he lost sleep over the punishments handed down by the league. You need help too, dude.

This is the reason so many other NFL fans think all Patriots fans are idiots. I'm so glad some of them are fueling that stereotype and are making the rest of us look bad.