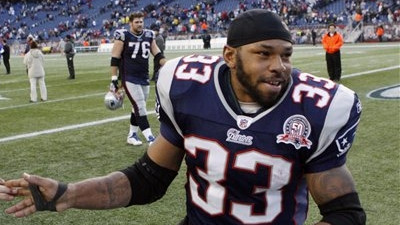 Former Patriots running back Kevin Faulk has been elected to the Patriots' Hall of Fame.

Faulk, who is very deserving of the honor, played for New England for his entire 13-year career. He was drafted in the second round of the 1999 NFL Draft and for his career, ran for 3,607 yards on 864 attempts, caught 431 passes for 3,701 yards and scored a total of 31 touchdowns. His best season came in 2008 when he ran for 507 yards with three touchdowns and racked up 486 and threescores through the air.

Faulk is a three-time Super Bowl champion and was named to both the Patriots All-2000s team, as well as the 50th Anniversary Team.

He retired on Oct. 9 2012 at a ceremony at the Hall at Patriot Place. Today, he appears on NESN on Monday's and Friday's for game previews and recaps during the season, and he also appears on WEEI's pregame show.

Faulk most recently appeared at the 2016 NFL Draft sporting a Tom Brady jersey when he announced the Pats' selection of Joe Thuney.