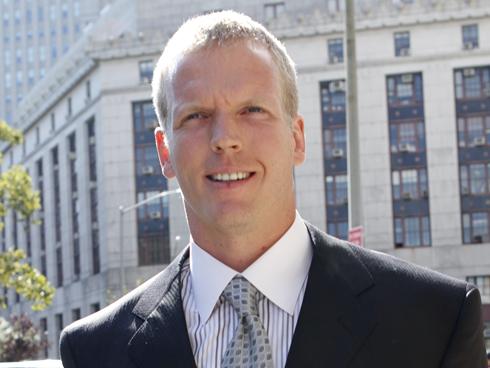 The reject son of Phil Simms is back with a vengeance.

Chris Simms, the former below-average NFL quarterback, filling in for WFAN radio host Craig Carton in New York, went on another rant about Tom Brady and Deflategate. Simms believes that Brady absolutely be suspended because he broke the rules.

“100 percent,” Simms said. “Listen, the guidelines, the way they are, whether you agree with them, and Roger Goodell being the judge, the jury, and the executioner — listen, the rules were put in place. If Tom Brady and Mr. Kraft had a problem with this, they should’ve changed that back when the CBA was under negotiation a few years ago.

Added Simms: “Of course he deserves to be suspended for this. He took the integrity of the game into his own hand. It’s like, you know, there’s a lot of examples you could come up with regardless. But it does give you a competitive advantage. It’d be like Golden State’s down there playing on a 9-foot-10-inch rim, and the other team’s playing on a 10-foot rim. There is definitely advantages there.”


Simms then tried to sound like even more of an idiot when he completely ignored the science that actually made sense.

“If we didn’t, if there weren’t advantages and it wasn’t a big deal, then why didn’t you just pump the footballs up to 13.5 and be, ‘Oh, I’m not worried about it’? He had every ball, they said before the game started was at 12.5,” Simms said. “Now I know everyone wants to claim the weather and that whole theory and all that crap, right? That’s a bunch of crap.”

Added Simms: “I don’t think it’s minor, to me. I think this is a guy that took the football and basically gave himself a competitive advantage, where the other quarterback on the other team did not have those advantages. And if the size of a football didn’t matter, then why do we have a high school football, why do we have a college football? Of course the size of the object in your hand matters, because you can manipulate it better with your hand.”


Simms, of course, has been a detractor of Brady and the Patriots since Deflategate began. And while the court of public opinion has softened somewhat on Brady, don't expect Simms to change his tune anytime soon. As of now, Brady is still suspended for the first four games of the 2016-17 season. Brady and his legal team are still waiting to find out if they will be granted a hearing en banc from the full panel of U.S. appellate court judges.