Vince Wilfork is proud of his body, tells Tom Brady to put him in touch with Gisele's people 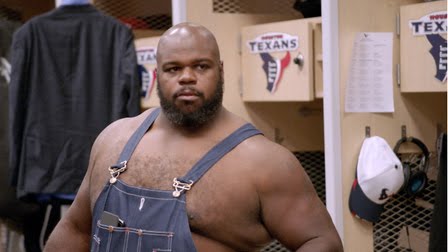 Vince Wilfork doesn't care what you think about the way he looks, and he should be proud of that. The big defensive tackle, who is going into his second year with the Houston Texans, was recently featured in ESPN The Magazine's body issue.

Asked why he chose to participate in a photo shoot for the issue, Wilfork said the following, per ESPN:


"I just think it's a good idea for people that are bigger-boned. If people can look at me, a guy that's 325-plus, doing an issue like this, I'm pretty sure that they might have a little confidence. There will be critics, just like with everything else. I thinink a lot of people will get a laugh out of it, I'll tell you that. I'm looking forward to what the locker room's going to say. But at the end of the day, I'm perfectly fine with who I am as a person and what I have accomplished. It shows a lot of my personality."


You can read Wilfork's full interview here. The body issue will be available on July 8.

Wilfork truly seems to be taking everything in stride to the point where he (jokingly) asked Tom Brady to talk to Gisele Bundchen, Brady's wife, about modeling.

Even though he's no longer a Patriot, how can you not love Vince Wilfork?