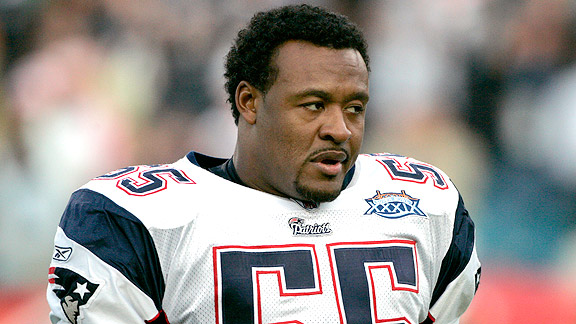 Former Patriots linebacker and current NFL Network analyst Willie McGinest is a big fan of Jamie Collins. When asked about who his top 3-4 linebackers are, McGinest said Von Miller, NaVorro Bowman and Collins.

“My third guy is Jamie Collins,” McGinest continued. “Really underrated guy. He’s big, 6’5, almost 260-plus pounds, but he can run with any tight end, any running back in the league. They do a lot of different things with him.”


McGinest knows what the Patriots look for in a player and knows how they like versatile players, so this is a dead-on evaluation of Collins. During multiple points of the last two seasons, we've seen the Patriots throw Collins in coverage and in multiple defensive packages. Collins is one of the fastest linebackers in the NFL and can match up with almost any tight end or running back in the game.

“Matt Patricia, the defensive coordinator, told me [Collins is] one of the most versatile players he’s ever coached in his career,” McGinest added. “He can get after the quarterback, you can bring him on those dog blitzes, you can play him in space because he covers so well. And against the run, he’ll come up and thug those offensive linemen.”


Collins is a free agent after next season and reportedly wants a big contract. The Patriots are notorious for letting players walk if they don't agree to the team's terms, and most of the time the team ends up looking smarter than the player. But Collins is a player they should do everything in their power to keep given his age and versatility. He is less of an injury risk than Dont'a Hightower, who is also a free agent after next season, and is an incredibly important part of New England's future.

You can watch McGinest's evaluation of Collins here.