A young, defensive player from the University of Alabama is making an early impact on defense. Does that sound familiar? It should. Alabama has turned into “D-U” over the past few years. With players like Marcell Dareus, C. J Mosley, Courtney Upshaw, Ha-Ha Clinton-Dix, Dre Kirkpatrick, and of course, the older of the two stellar New England Patriots linebackers, Dont’a Hightower. According to Devin McCourty and Mike Reiss, we may be able to add Cyrus Jones to the list very soon. 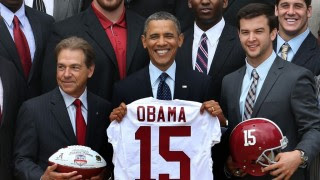 New England loves to draft versatile players, and Jones is no exception. At 5-foot-10 inches and 200 pounds, he is long and lean. He is also athletic enough to have the Patriots consider him as a kick and punt returner. Cyrus Jones has to be talented in the return game, think of who the New England Patriots have available to play that position: Julian Edleman, Danny Amendola, Legarrette Blount, Dion Lewis (maybe) and several others.

Some players, along with the coaching staff have noticed Cyrus Jones’ superior play. Devin McCourty compared the Alabama defender to his new teammate Dont’a Hightower. 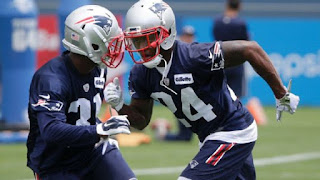 If Cyrus Jones really is similar to Dont’a Hightower, the New England secondary should be just fine.

Thanks to A/P Photo/Steven Senne for the Jones picture, and the Washington Post for the Alabama Photo


Is Cyrus Jones going to be the new Hightower? Let me know on Twitter! @petereddy19993