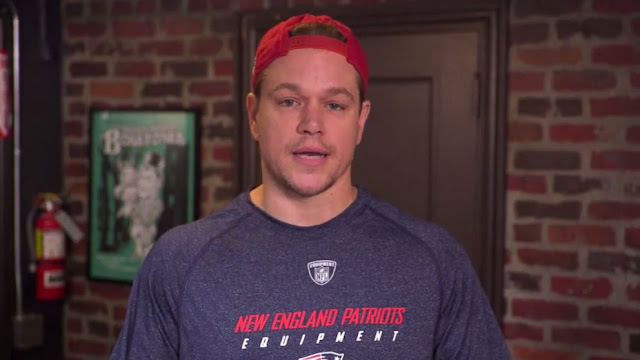 If you're like me, which most of you probably are, then while you were watching the Matt Damon video on Tom Brady, you were more than likely hoping for a Ben Affleck-esque cussing filled rampage on why TB12 shouldn't be suspended and why Goodell should be impeached from his throne of tyranny (Warning: Link has NSFW language). Well, unfortunately the Boston native didn't deliver that type of speech, but he did touch on some interesting points regarding the 4 game suspension of New England's favorite quarterback.

For those of you who don't know or haven't seen the video that's been floating around Twitter, actor Matt Damon recently went on the Rich Eisen Show and talked about his latest film and also shared his thoughts on Tom Brady and the whole Deflategate saga. Damon has always been a Boston sports fan, as shown in the picture above, and has not shied away from talking about his beloved Patriots.

In his little spiel about the Pats, he touches on some great points that I think some New England fans need to hear. For starters, the Tom Brady suspension isn't the end of the world by any means. If anything, we get to see an even more pissed off Tom Terrific than we would of saw if he wasn't out for the first 4 games. Second, Jimmy Garoppolo gets his moment in the sun, and we can all just sit back and see how he performs. If he plays great, then we either have a solid successor to Brady's throne, or we have a great trade-worthy player. If he doesn't play well, which I don't see happening, then we get to see Brady come in and bring us back in dramatic fashion. Either way, the Pats are still going to be in that AFC Championship Game, and Goodell can do absolutely nothing to stop them. So, like Damon reiterates, Tom Brady being out for the first 4 games could end up being a blessing in disguise, and the entirety of Patriots Nation should come around to this point of view.

All in all, I love seeing famous actors and musicians root for the Pats and defend them. I think it's an awesome thing to see and I wish someone like John Krasinski or Steven Tyler would come out and say something but I'm perfectly content with listening to Ben Affleck sputter out curse phrases to Bill Simmons on live television.