As Bill Belichick constantly preaches, the jump from year one to year two is one of the most crucial for the development of young players. Adjusting from college ball to the NFL doesn't happen overnight, and it takes many players until their second year to really make the transition. One second year player who I think is primed to make a big jump forward this season is cornerback Darryl Roberts. 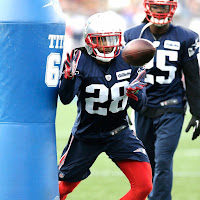 At 6'0" 190lbs, Roberts is the tallest CB on the Patriots roster and is a very tough, physical corner with long arms that he uses to his advantage. With his combination of length and athleticism, he's an ideal fit to play on the outside. He has looked very impressive in man to man coverage, and isn't shy about coming up to help with run support either. A gifted athlete, the 25 year old cornerback has also shown excellent recovery speed along with great change of direction skills. His measureables certainly don't disappoint either, as he recorded a 4.38 on the 40 yard dash with a 6.66 3-cone drill, in addition to his 39" vertical leap and 11'1" broad jump.

It only took a few days into training camp last year before Roberts caught my eye and started turning heads on the field, where he began quickly improving almost everyday. Roberts play making ability began to show more and more often as camp wound on, as he displayed great ball skills and was breaking up passes regularly. In fact, at one point last year I had him locked as the number 3 cornerback on the roster, and possibly giving Logan Ryan a run for his money for the starting job.

Roberts was a late seventh round pick out of Marshall, where he had 186 tackles, 38 passes defensed, and 5 interceptions in 54 games. The 247th overall pick then went on to have a very impressive camp with the Patriots in 2015, and Bill Belichick seemed ready to give him a significant chance to prove himself in the NFL. Unfortunately after earning the starting spot opposite Malcolm Butler in the opening pre-season game against the Packers last year, Roberts 2015 campaign was cut short when he landed on season ending IR after dislocating his wrist attempting to tackle Eddie Lacy.

Though Roberts hasn't yet had the opportunity to truly showcase his ability to the masses, if last years camp is any indication he'll surely leave an impression this year. When asked about the injury that ended his season prematurely, his response was encouraging. “I’m feeling good now,’’ Roberts said. “Feels good to get back out there flying around and getting to compete with my team.’’

With a clean bill of health, I fully expect Roberts to pick up where he left off last year as a potential difference maker for the Patriots defense. If you also take into account his reputation as an excellent cover guy on special teams, the chances of him making the 53 man roster look pretty convincing. Not only do I expect him to make the second year leap and make the roster, I believe with his high level athleticism and raw skill-set he's ready to have a breakout season in 2016.