The demise of Deflategate may be greatly exaggerated

― John Steinbeck, Of Mice and Men
Thus was the "end" of Deflategate.

With that post the seemingly never-ending Deflategate saga came to an abrupt halt. The moment, completely unexpected seemed in a surreal way frozen in time.

I was completely stunned when I first heard the news, but after having a weekend to digest and analyze, I believe Tom Brady made the best decision he could given the circumstances, and with the NFLPA reserving the right to move forward to petition certiorari Deflategate may not be over yet.

While I was initially dismayed with Brady’s decision it didn’t take long to realize that it was quite sensible on his part. Given the options available he made a very smart choice. Assuming Justice Ginsberg granted a stay, which in my opinion was a reasonable scenario, it would have been difficult to calculate when the Supreme Court might decide on whether or not to hear the case, and unfortunately the odds were against the quarterback on a favorable decision. Percentage wise, odds of being heard at the Supreme Court are quite similar to odds of an en banc petition being heard in the Second Circuit – less than one-percent. Should SCOTUS have denied the petition at an inopportune time, Brady could have faced suspension mid to late season or even in the play-offs or ultimately the Super Bowl.

Through ending his legal battle in the manner in which he did, he managed to maintain his innocence, alleviate the pressure of additional months of litigation and return his full focus to the sport he loves. And always the consummate team player, he has again placed the Patriots in a more favorable position as Bill Belichick will have a definite perspective from which to lay strategy for the first four games as well as the season as a whole. Tom Brady has made a lot of good decisions in his career and this was one of them. He realizes the ultimate goal of another Super Bowl ring outweighs a personal vendetta against an inept, power hungry commissioner. He understands that this is a battle that can best be carried out by the players association at this stage of the game.

Is the demise of Deflategate greatly exaggerated?

I for one, believe that it is. Almost immediately after Brady posted to Facebook, the NFLPA released a statement reserving the right to continue the legal battle without Brady, as I believe they should. While opinions differ as to whether Brady’s decision will weaken the NFLPA’s position with SCOTUS, my personal view is that it will not. [UPDATE: It has been reported today that Tom Brady has authorized the NFLPA to continue the fight on his behalf.]

From the time the Roger Goodell acted as judge, jury and executioner ruling it “more probable than not” that Brady was “generally aware” of a football deflation scheme, and then upped the ante implying him as the ringleader of a conspiracy to undermine the “integrity” of the game, Brady has been but a mere pawn in a colossal game of chess regarding the commissioner’s collectively bargained power granted in Article 46 of the CBA.

Perhaps the drama of the NFL’s greatest reality show was a bit too much for almost anyone to properly digest and filter. Even in issuance of their opinion Judges Barrington Parker and Denny Chin seemed a bit obsessed with Tom Brady’s physical cell phone in spite of the fact electronic records submitted matched the record of Wells Report documented communications.


"America has an unhealthy obsession with football. . .An institution that deals with weighty issues that affect the lives of millions, such as marriage equality, reproductive rights, and campaign finance, is now going to intervene in a power struggle between millionaires and billionaires over who gets to play in football games? No thanks."


Mr. Gasper, along with numerous other journalists I’ve read, both throughout the Deflategate saga and especially within the past few days missed the point. While Tom Brady was the face of Deflategate and his fate did hang in the balance, the issues of unbiased arbitration, adherence to “law of the shop,” and fundamental employee rights were swept conveniently out of the picture, and those issues could affect anyone.

People tend to fall prey to first impressions and inaccurate reporting. This quickly escalates when bad reports surface and are picked upon and regurgitated by other media sources rather than being corrected. The media, is not always in the know. Consider this remark from respected Houston attorney and Deflategate commentator Stephanie Stradley:

This argument is reiterated in a tweet from a criminal defense and civil rights attorney that appeared on the same thread:

Assuming the NFLPA petitions for writ of certiorari from the Supreme Court, which I feel is a most likely scenario, Deflategate is not dead; it will merely take on a different demeanor. It is my hope that the real issues at stake will now be the focus of the case and that the NFLPA legal team will arm themselves with all the firepower they can muster. They have until October 13 to file a petition for writ of certiorari and considering that Theodore Olson submitted a near last minute petition for rehearing, I would expect him to take his time in preparing a most compelling and persuasive argument. I’d also expect a number of amici briefs to be filed, as they are much more prevalent at the Supreme Court level than within District or U.S. Circuit Courts.

What will be needed to succeed at the Supreme Court level?

It is essential that the NFLPA present the case as one with broad application. It is highly unlikely and rightly so, that SCOTUS would consent to hear a case based on industry specific (sports) issues so it must be presented as a case with the potential to affect a large segment of the American populace. In my opinion, there is no stretch in saying the recently set Second Circuit decision qualifies as one with broad and dangerous ramifications.

More so than focusing on evidence presented after the fact, while an important factor, I believe the legal team and supporting amici must present an impeccable case for fair arbitration. Arbitration affects thousands upon thousands of Americans every year. Collectively bargained union agreements are but one type of case that lands before arbitrators in rapid succession. Many if not most commercial and consumer disputes are also subject to arbitration. Since workers, and consumers compose nearly the entirety of the American populace, potentially anyone could easily be impacted if unfair and biased arbitration becomes acceptable through court precedent.

The Supreme Court has looked at arbitration more closely in recent years and it is a subject that seems to be of interest to the High Court.

Daniel Wallach is a sports law, gaming, and appellate attorney whose work I admire greatly because he tends to dig below the surface of matters to mine out details that are often missed by others. Recently he noticed, and on Twitter, brought attention to Masimo Corp. v. Ruhe, a commercial case currently pending in the SCOTUS cue. Excerpts of this cert petition seem to be uncannily reflective of Deflategate matters. It begins as such: 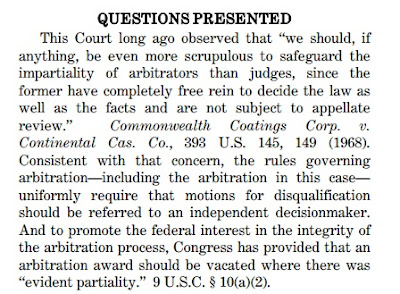 This is an area in which lower courts have found disagreement -- an additional factor heavily weighed with the High Court. On Twitter, Wallach cites language from underpinnings of the SCOTUS decision on the “evident partiality” principle from the Commonwealth Coatings Corp. v. Continental Cas. Co. case in which a ruling was reached over 50 years ago.

Evident partiality was not a principle utilized in prior proceedings in the “Brady case.” It seems to me this broadly applicable principle should be vigorously pursued as the NFLPA legal team prepares to lock down their petition.

On April 25, following the Second Circuit ruling, Dan Werly, a sports law attorney and managing editor of the White Bronco, wrote, “Make no bones about it, today’s NFL’s win in Deflategate is a landmark opinion. Not only does the opinion come from a federal appeals court, which increases the opinion’s precedential value in future cases, and from the appellate court where the NFL’s headquarters are located, which is more likely to be the venue for future cases (further increasing the precedential value.)”

This precedent must not be allowed to stand.

“We’ve gone from the Ideal Gas Law to a less than ideal arbitration,” respected arbitrator and attorney David Evans of the Boston Law firm Murphy King, said to me recently. Indeed we have.

It seems fitting to end this piece with the words of perhaps the most celebrated and widely respected arbitrator in the United States, Kenneth Feinberg, who authored an amicus brief to the Second Circuit (which, sadly was apparently unread or disregarded). In the brief he spoke not about upholding the arbitrator's power, but urged the court to demand that it is fairly applied. In disagreement to the sham arbitration conducted by Goodell, he closed the brief with these words:

“Fair process before a fair tribunal cannot be an aspiration; it is an unwaivable, inviolable necessity.”