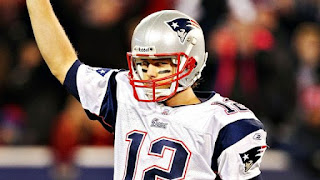 Yesterday Chris Simms on the Toucher and Rich show came in with a very bold claim, stating that Tom Brady isn't a top 5 quarterback anymore. I haven't even listened to his explanation and I don't need to, that's how INSANE of a statement this is. In this modern day of hot takes and saying anything to rile up your audience for ratings, I have to wonder if this is just something the shows producers came up with to stir the pot. Regardless, I'll explain why this couldn't be further from the truth.

For starters, who's better than Brady? Anyone saying Aaron Rodgers has a legitimate argument. According to the people voting for MVP last season Cam Newton is. Can you even make a serious case for anyone else? Russell Wilson? Big Ben? Any mention of that turnover machine in Indianapolis named Andrew Luck and I may actually throw up.

One look at Tom's numbers from 2015 easily show he's still one of the best. He had better numbers in most categories than league MVP Cam Newton. Brady had 36 touchdown passes to Cam's 35. He had Cam beat in passing yards by 933, tallying an impressive 4,770 while Cam recorded 3,837. Tom only threw for 7 interceptions all season, compared to Cam's 10. Brady boasted a 102.2 passer rating, beating out Cam who came in with a 99.4 rating. Obviously Cam has an advantage over Brady when it comes to running but that's about it. You could point out that Cam lost Kelvin Benjamin, his top receiver, for the year but Brady dealt with injuries to his top targets throughout the season (Edelman, Gronk and Amendola) all while having an anemic run game after Dion Lewis went down with a torn ACL.

How can you look at those numbers and say he's not a top 5 quarterback? You're talking about a guy who didn't throw an interception for the first half of the season (first one came on a bobbled pass by Julian Edelman that should've been caught). You're talking about a quarterback who led his team to a 10-0 start last year and the number two seed in the AFC East. Even putting the numbers aside, the eye test alone should tell you Tom is undoubtedly one of the best. His pre-snap reads, audibles at the line and ability to find holes in any defense are nothing short of amazing.

There are hot takes and then there's non sense. Enough with the non sense, Chris.