Jimmy Garoppolo will start tonight against the Saints 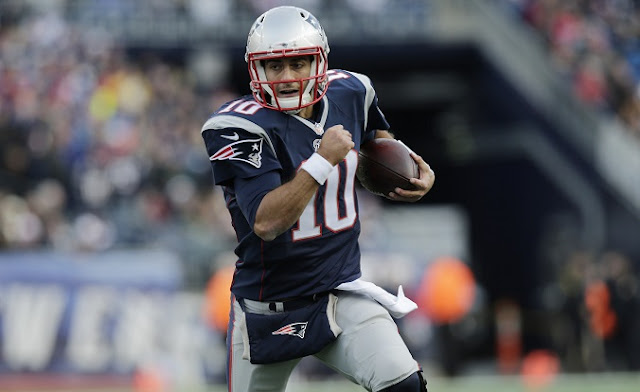 It's the Jimmy Garoppolo Show tonight, as the Patriots' fill-in quarterback will start tonight in the team's preseason opener against the New Orleans Saints.

Take his start tonight lightly, though. Mike Reiss of ESPN Boston is reporting that both Julian Edelman and Rob Gronkowski won't play, so Garoppolo will be without two of his biggest targets. Chris Hogan, who has been very good in training camp, will also not play.

A big question that hasn't been answered yet is how long Garoppolo will play. Given that Tom Brady is sitting out and Jacoby Brissett is the only other quarterback on the roster, one would have to assume Garoppolo will play a fair amount.

But of course, I'm not Bill Belichick and that dude is an evil genius so he'll probably do the exact opposite of what I'd expect him to do.

Even though Gronk, Edelman and Hogan are out, Garoppolo (as of now) will still be able to throw to Danny Amendola and Martellus Bennett, who also figure to be big factors in the offense this year. The Saints defense isn't exactly world class, so Garoppolo could still find some success with just those two in the lineup.