Patriots vs Saints preview: What to watch for 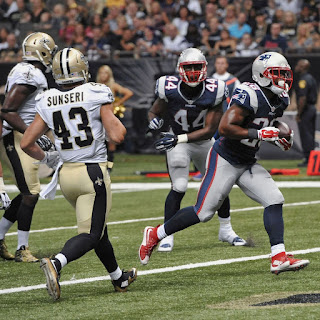 The Patriots are set to kickoff their preseason tomorrow night at home against the Saints, and there's a lot to keep an eye on throughout the game. This years team is loaded with talent, and may be the best roster top to bottom the Patriots have had in the Bill Belichick era. With that in mind, here's what to look for tomorrow night at each position.

QB- Obviously all eyes will be on Jimmy Garopollo the moment he steps on the field. With Tom Brady not playing tomorrow night, Garopollo will get some much needed reps with the starters, and it will certainly be interesting to see how the team manages their reps going forward. We will likely also see Jacoby Brissett make his NFL debut late in the game.

RB- I fully expect Legarrette Blount to get the start, but who's next on the depth chart after that? For me, the guys to watch are Tyler Gaffney and undrafted rookie DJ Foster. Foster turned a few heads in the spring but lost some momentum coming into camp. Gaffney has been on the roster for what feels like a decade but has yet to see any playing time due to various injuries. Both need a strong preseason to make the team, but with the uncertainty behind Lewis and Blount at the position there's a good chance one of them makes the 53 man roster. We should see a decent amount of James White as well, who has hopefully improved this offseason as a between the tackles runner.

WR- It's a very tight battle for 5th roster spot at receiver (Julian Edelman, Danny Amendola, Chris Hogan and Malcolm Mitchell are all locks to make the roster). While I'm looking forward to seeing rookie Malcolm Mitchell in action (he's looked outstanding so far), the real competition is between Aaron Dobson, Keshawn Martin, Chris Harper and Deandre Carter. Dobson has been lighting it up at camp so far, but we've seen this before. While he has the size and physical tools that should easily earn him a roster spot, he finds himself on the bubble due to his inability to stay healthy and contribute consistently when on the field. If Dobson can stay healthy and make a few plays this preseason, the 5th receiver spot will likely be his. However with Amendola still on the PUP list, the Patriots could carry an additional receiver on the roster until he's ready to return. Nate Washington threw up on the first day of practice and hasn't seen much action since, so look for him to play with an extra edge as he attempts to make his way back into Belichick's good graces. Washington has a lot of ground to make up to make the roster.

Offensive Line- Rookie Joe Thuney has looked extremely impressive thus far, and is definitely the top guy to watch among the lineman. It's still early but he seems the clear cut top choice for the starting Left Guard position. He should see a healthy dose of playing time tomorrow night. Another point of interest will be how comfortable Left Tackle Nate Solder looks if he starts, as this will be his first game action since his season ending biceps injury last year. At the Right Guard position keep an eye on Jonathan Cooper, who will hopefully be much improved under the tutelage of coach Dante Scarnecchia.

Defensive Line- The big question is who starts opposite Jabaal Sheard in place of the injured Rob Ninkovich. There's a good chance whoever starts this game will be the starter until Ninkovich returns, and if I had to guess I'd say it will be veteran Chris Long, though Shea McClellin could get the starting nod. Long likely won't see many snaps, so the key is here is to see how comfortably he moves out there as his past 2 seasons have been cut short by injury. Trey Flowers should see plenty of playing time, as well as fellow second year players Geneo Grissom and Rufus Johnson. As of now Flowers has showed the most potential of the three, so look for him to show some flashes of his ability against the Saints.

Linebacker- With the top two linebacker jobs obviously locked up ( Hightower and Collins) it's pretty much an open competition after that. Kamu Grugier-Hill is an intriguing rookie, a bit under sized for a linebacker but extremely athletic and versatile. It will be interesting to see how Belichick uses him. Speaking of versatility, Shea McClellin has experience playing linebacker with the Bears, so it wouldn't surprise me to see Belichick experiment with moving him between DE and LB. Jonathan Freeny could be playing for his job, so watch for him to try and make an impact at every opportunity.

CB- Behind Malcolm Butler, Logan Ryan and rookie Cyrus Jones, there's likely only one roster spot available. The battle for the fourth spot will likely come down to Darryl Roberts and Justin Coleman. Roberts looked fantastic as a rookie last year in camp before landing on season ending IR after his first preseason game with a broken wrist. Coleman was a solid contributor throughout the season last year and looks to build off of that success this year. I'd expect to see a heavy dose of both these guys throughout the preseason. Though Cyrus Jones is projected as the teams top option as a slot corner, look for Belichick to move him around a bit as he's a very well-rounded, physical corner who may be able to make an impact as an outside corner as well.

Safety- Can second year safety Jordan Richards make an impact? The 2015 second round pick didn't see much action in his rookie season. Richards has been buried on the depth chart behind McCourty, Chung and Harmon. Safety might be the deepest position on the roster top to bottom, but Richards is definitely the breakout candidate to watch.