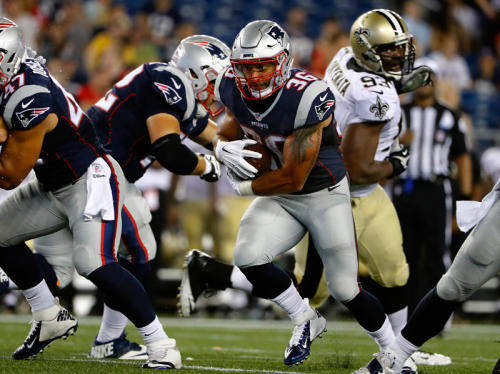 Don't look now, but the Patriots run game has been the most impressive aspect of the team this preseason.

Going into the 2016 season, many people, critics and fans alike, didn't expect much from the New England run game in terms of actually rushing the ball. Ever since the glory days of Corey Dillon and that short period with Laurence Maroney, the Patriots haven't truly had a workhorse running back. Sure, you could argue that Stevan Ridley and LeGarrette Blount could somewhat take that title but they aren't true every-down backs. Last year saw the short, but powerful, emergence of Dion Lewis, who should be close to an every down running back this year once he's fully healthy but even he isn't considered to be a rushing threat. However, there seems to be something brewing up in Foxboro in terms of a brand new rushing attack.

For a couple years now, Bill Belichick has been, in a word, hoarding athletic and pass-catching running backs. Just a few examples: James White, Tyler Gaffney, Dion Lewis, Travaris Cadet (released), DJ Foster, Donald Brown, you get the idea. None of these backs are known for their rushing ability, but more for their catching abilities. However, Bill Belichick lives for messing with opponent's minds, and this preseason has shown a plethora of long, impressive runs by these backs, who aren't known for those types of runs. However, for the second straight week, backs like James White and Tyler Gaffney have broken off for huge chunks of yardage out of the backfield. Yes, Jimmy G has been impressive (at least last night), but the rushing game has been nothing short of outstanding. In the first two preseason games combined, New England running backs have accumulated 265 yards on the ground, with Tyler Gaffney and LeGarrette Blount leading the way with 95 and 85 yards, respectively.

Many people are wondering why the sudden change, asking where was this last year? Well, last year Belichick didn't have many options to work with: Blount, Steven Jackson, and White. This year? He's got at least 4 more guys that could step in at any time and fill the third down back role. With so many pass-catching backs, the opposing defense has no idea what to expect when one of those backs steps beside or behind the quarterback, which is why you're seeing so many long runs; the defense has to prepare for a screen or long pass down the sideline. While they're focusing all of their attention on those plays, it leaves a wide open hole for a draw or toss play, leading to 10 or more yards on the ground.

If the Patriots can, at long last, find a stable running game behind the likes of Dion Lewis, LeGarrette Blount, and James White, then I find it extremely difficult to think that a team in the AFC could potentially knock off New England in January.