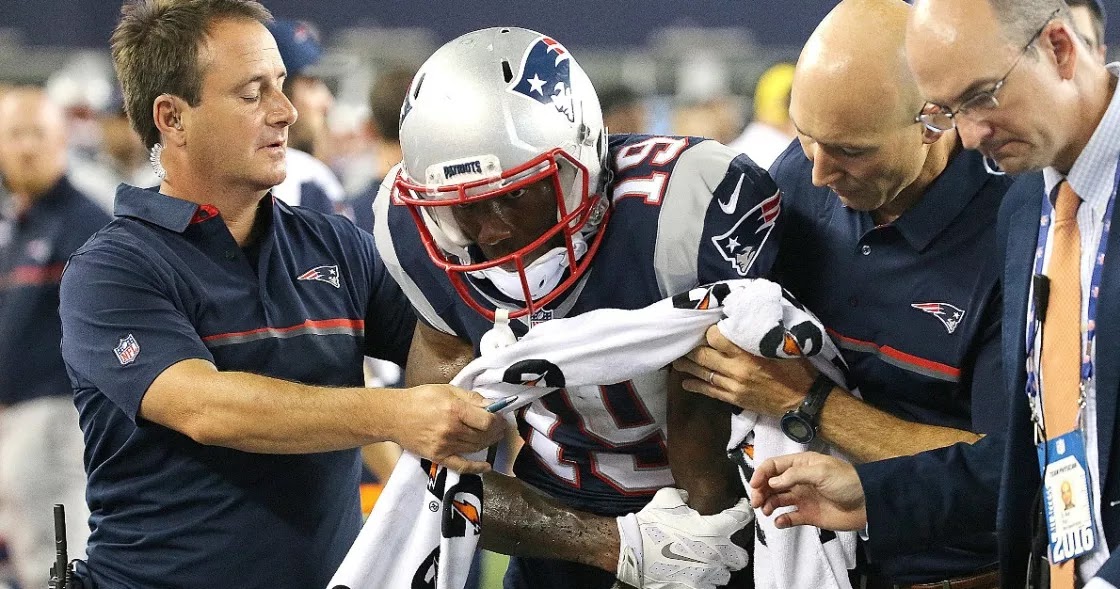 In what was somewhat lost in a night of celebration and triumph, Patriots rookie wideout Malcolm Mitchell suffered a terrifying arm injury while trying to turn a nice catch into more yards.

When New England drafted the tall, lengthy receiver from Georgia, many people were not sure what to think. He had some great statistical seasons for the Bulldogs, but he was seen as a bit of a flight risk due to his injury history and the uncertainty of whether or not his skills would translate to the NFL. Flash forward to now, and Mitchell is being seen as the Pats number 4 receiver heading into the season. His size and catching ability have proven to be quite the assets during training camp, and many were looking forward to seeing how he would play in actual game.

Well, unfortunately that spectacle will have to be put on hold for at least 4 weeks. He was attempting to stretch a catch into a few more yards and came down awkwardly on his arm, bending it in a way that it is not supposed to be bent. I'm not going to put a picture up due to the harsh nature but if you want to take a look you can here. According to sources, it's a dislocated elbow for Mitchell, which is better news than we could've hoped for after first viewing that injury.

Before he went down, he was having a decent game, reeling in 4 catches for 55 yards. In regards to his roster spot, it could be in jeopardy. With vets like Keshawn Martin and Nate Washington foaming at the mouth to secure a spot on the 53-man team, 4 weeks will seem like an eternity for Mitchell. However, he has been impressing Belichick and the staff all camp long, and he might have already done enough to deserve a spot in the lineup when he returns.

In any matter, I hope Malcolm comes back fully healthy and ready to fight for a spot on this team because he can definitely contribute.