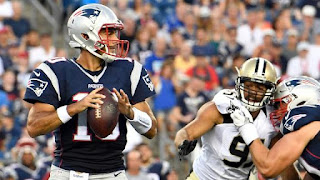 It's no secret that all eyes were on Jimmy Garoppolo last night the moment he stepped on the field. Unfortunately for Jimmy, he's going to be subject to Tom Brady comparisons at least until Tom's return in week 5. It's very unfair however to compare him to Brady because very few, if any, quarterbacks will ever reach his level. Fans are so used to how incredible Brady is that they might be expecting a little too much out of Jimmy at this point in his career. Keeping that in mind, let's take a look at the good and the bad from Garoppolo's performance last night.

The night certainly started off slowly for Jimmy, with three straight three-and-outs to begin the game. Before jumping to conclusions, it's important to remember that outside of Martellus Bennett, Jimmy was without all of the top options (Gronkowski, Edelman, Amendola and Lewis were all inactive) on offense. He only completed three passes on his first three drives, all of which were caught by Bennett. Garoppolo looked indecisive and uncomfortable early on, though part of that was likely because the run game and offensive line weren't doing him any favors. Things finally started clicking for the offense by the fourth drive of the game, and Garoppolo completed 8 of his next 11 passes, finishing the night 11-18 for 168 yards. He got through his progressions and threw to his second and third reads a few times, which is an encouraging sign for a developing quarterback. Two positive plays that stood out to me were when he avoided pressure and dumped the ball off to James White, who went for 56 yards and what should've been a touchdown and a nice 24 yard pass to Malcolm Mitchell on a sideline fade. Garoppolo seemed to have very good chemistry with Mitchell before he left the game with an elbow injury.

Unfortunately there were a few negatives that caught my eye as well. Garoppolo held onto the ball far too long at times, and there were two or three instances where he seemed to freeze up for a moment. He needs to work on his pocket awareness, there was one particular play where he was sacked but should've anticipated the pressure and slid up in the pocket. Marcus Cannon completely whiffing on a few interior moves certainly didn't help Jimmy's cause either. There was also a VERY ill advised throw as he scrambled and came back across his body as he threw to no one in particular in the middle of the field. He got away with it just being an incomplete pass, but 9 times out of 10 in the regular season that's an interception and unless you're throwing to 2001 Randy Moss, no one is going to bail you out with a catch on those type of throws. Garoppolo acknowledged the throw after the game, "Just an error throw," he said. "A bad decision, can't make it, and won't do it in the future."

All things considered Garoppolo had a pretty solid game despite a few mistakes.
For the most part he has only played pre season football in the pros, as he's had extremely limited playing time in the regular season the past two years. As long as he can continue to build off each performance going forward and learn from his mistakes, he should be a capable replacement for Tom Brady during his suspension.