Some of you may have missed the shot Bart Hubbach fired at the Patriots... Well good news, you won't ever see it! Bart Hubbuch deleted his whole Twitter account after seemingly calling the Patriots racist. All of this many seem a bit confusing. So let's get the details straight here. 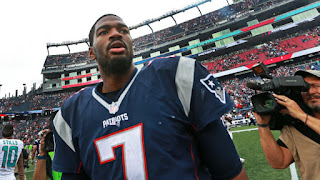 Why?
After the stat came out that Jacoby Brissett would be the first black quarterback to ever start for the Patriots Bart sent out a tweet saying:

Totally not-shocking fact: The Patriots have never had a black QB start a game in their 57-year history. Jacoby Brissett would be the first.

Maybe Bart should have done his research before making such accusations. Let's get to the numbers of this:
The current Patriots roster is 65 percent African American.
The Patriots aren't the only team to never have an African American starting quarterback. The Giants and Chargers are also on that list.

So as Bart Hubbuch took the cowards way out by completely deleting his Twitter account, hopefully the Patriots can do the opposite of that on Thursday Night Football and stand tall against the Texans.