Nothing to see here, just Bills fans putting themselves through tables 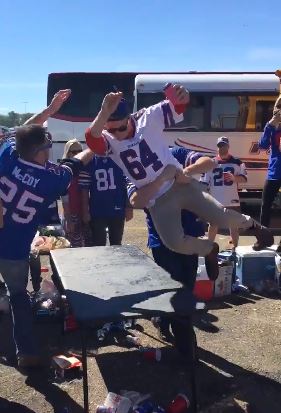 Football season has a lot of meanings to fans everywhere. For some fans, it means the opportunity to see if their team finally pulls it together for a January playoff run. Other fans may just want to fast-forward to next year's draft, while many of us find that our fantasy teams are just not quite performing up to our standards.

For Bills fans, it means the opportunity to rock the Zubaz, crack open a case (or more) of Labatt and tailgate recklessly. Because if there's one thing I've learned over the years, it's that the best tailgates are the reckless tailgates.

The Bills may have beaten Arizona 33-18 for their first win of the season, but the real victory came in the parking lot as two Bills fans combined to propel another Bills fan through a table:

Not just one, but two Richie Incognito jerseys. Spectacular.

A fan dressed as "Macho Man" Randy Savage also got in on the fun, participating in a round of Dizzy Bat:

The best part? This elbow drop from the top of a Lexus. I'll let the clip speak for itself:

Bills fans, and their debaucherous parking lot behavior, have been making the rounds online for quite some time now. I understand where they're coming from, though -- if the Ryan brothers coached my team, I'd put as many people through tables as I can find.