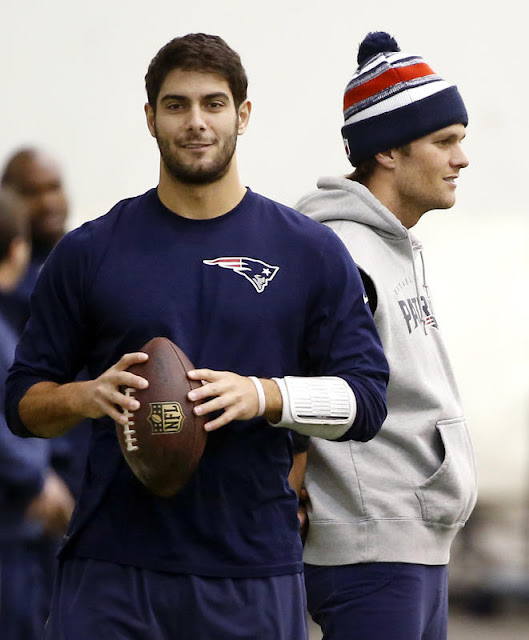 No matter the outcome of these four games, no matter how good Jimmy Garoppolo performs, it will never become customary for New England to watch anybody but Tom Brady drop back to pass or scramble in the pocket. Seeing a #10 on the backside of the quarterback instead of #12 will definitely take some getting used to over these next three games; and if you think it's hard for us the fans, picture what Tom Brady thinks as he's watching from home. Imagine being him sitting on his couch, even if he is sitting next to Gisele, and having to watch your team on T.V. play without you, the person who has led the team out onto the field for the past 15 years; that has to be absolute torture for TB12. However, like the good sport he is, he put those feelings aside and made a few comments on the performance of Jimmy Garoppolo after Sunday's game.

In an interview with Westwood One on Monday, Brady had this to say about Jimmy and the offense's great game:

"It was a great night for him and our whole offense. I think one thing you realize as the quarterback is everyone being in sync, and on the same page, and the communication with your teammates, is so critical. For us to go in there and get a win like that, it was great for obviously our offense, the defense played great, special teams; it's such a team sport.

" Jimmy did everything he was asked to. It was a great way to start the season for our team."

Hearing Brady call the Patriots "our team" nearly brought a tear to my eye. I'm sure it's hard for him to see Jimmy doing so well, not because he doesn't want the team to win games, but because he knows exactly how he got his starting job back in 2001. Now I'm not saying by any means at all that once Brady's suspension is over and if the Patriots are 4-0 that Garoppolo would have any shot at starting over him, because he wouldn't; I'm just saying that Brady is starting to get up there in age and New England has a future to think about. I fully believe him when he says that he wants to play until he sucks, which is God only knows how long away, but if Jimmy plays really well over these next three games, after his contract is up after next season, teams will come by the dozens with money spewing out of their greedy little pockets. Just look at Brock Osweiler: he played well in a handful of games and once he became a free agent, Houston offered him millions and millions of dollars. Of course I would want Brady over Jimmy any day or week or year, but a difficult decision regarding Garoppolo's future could be upon us, because, let's face it, it's not too often a guy appears that is worthy of being called Tom Brady's successor, and Jimmy G just might have what it takes. Do the Patriots let Jimmy walk away if he doesn't want to stay loyal and keep Brady, banking on TB12 to keep producing at an elite level? Or do they sign Jimmy and hope he's okay with being a backup for a couple more years? It's a difficult question, but luckily New England won't have to worry about that for some time, and for now, they can enjoy what looks to be like another Super Bowl bound year.