When you play great, you get recognized. Dont'a Hightower has been named AFC Defensive Player of the Week for his efforts in the win against the Cincinnati Bengals. Hightower forced the turning point of the game when he sacked Andy Dalton in the end zone for a safety. Hightower also led the team in tackles, with 13, and had one and a half quarterback sacks. 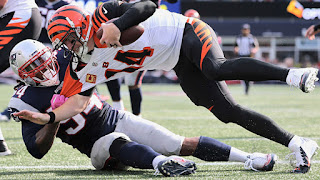 This is the first time Hightower has been named the AFC Defensive Player of the Week.It is also the first time a Patriots defensive player has been given the honor since Chandler Jones in week 2 of the 2014 season. This is the fifth time this season that a Patriots player has been recognized for their play, Stephen Gostkowski (Week 1), Ryan Allen (Week 3), LeGarrette Blount (AFC Offensive Player of the Month-September), and Tom Brady (Week 5).

If the Patriots continue on the roll that thy have been on, there will be plenty more awards to come. Congratulations Dont'a!