Jets failure is brilliant! Surely the AFC East is the Patriots' to lose 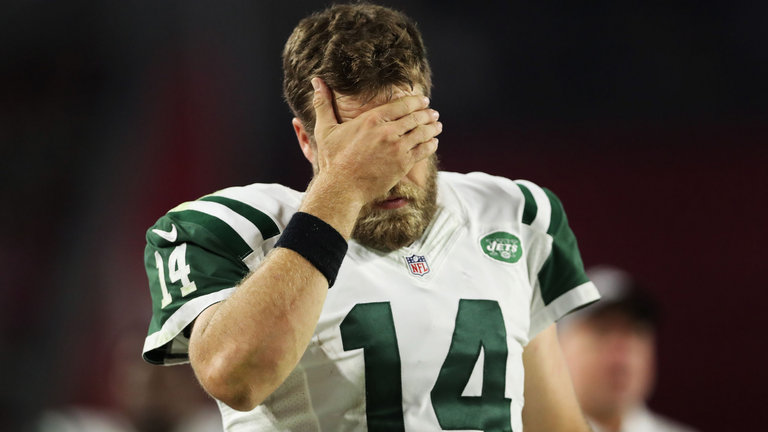 Haha! This is great seeing the New York Jets go from a potential threat for the AFC East to the Patriots, to arguably the team that has regressed the most this year. In midst of a four-game losing streak and having to actually put in Geno Smith shows the desperation in New York.

Head Coach Todd Bowles pulled Ryan Fitzpatrick in the 28-3 loss Arizona Cardinals with over 8 minutes left in the game but he clearly stated that 'Fitz will be back next week.' There could be reasoning, to think about dropping Fitzpatrick with the Jets only scoring three touchdowns in the last four games and face the Ravens this Sunday. Bowles spoke to ESPN's Rich Cimini:


"He wanted to get him some reps." He used a baseball analogy and said he was simply inserting a relief pitcher.

"It's not that I have no confidence in Geno," Bowles said. "We have two quarterbacks that can play right now. Fitz is our starter. Anybody back there would've been under duress today."

"It definitely wasn't Fitz's fault," Bowles said. "He barely had time to throw. Anybody you put back there would've had problems."

Typical Geno Smith. He gets his chance after four completions in a row, then get sacked and throws an interception, we all know Fitz is still the starter because Smith is awful. As Patriots fans it is great to see the old enemy struggling and this will see us win the AFC East once again.