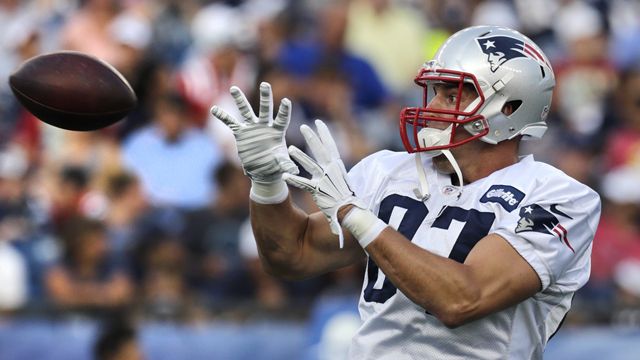 As Patriots fans we watch him every week. When he's not injured Rob Gronkowski is arguably the toughest receiver to cover in the league and it looks like Denver Broncos cornerback Chris Harris agrees.

Harris spoke about this in an article from the Player's Tribune who release a piece from a player on their toughest opponents. Number 1 straight away from the Broncos cornerback was Gronk:


“Yeah, he’s technically a tight end,” Harris wrote, “but I’m including Gronk, because when I think about the toughest guys to line up against, he’s the first name that comes to mind. Yes, he’s physically bigger than everybody. That’s a given. But the thing people don’t appreciate enough is that he’s got amazing hands. What makes him so difficult is that he’s 6-foot-6, 265 (pounds), but he also has the route-running ability and hands of a wide receiver.”

“Gronk lines up in the slot and uses his strength to beat the first man, then he splits the soft spot between the corner/linebacker and the safety,” Harris explained. “The thing about the seam route is, the receiver knows he’s probably gonna get popped. He’s gotta catch the ball right in front of that patrolling safety. Gronk is able to take the punishment and hold on to the ball”

One of Gronk's best ever catches came against Harris in 2014 when he plucked a one-handed catch out of their air in tight coverage. Denver seem to be one of the tight ends favourite teams to play against catching 30 passes for 371 yards in 5 games. As well as Gronk, Harris named Antonio Brown (Steelers), T.Y. Hilton (Colts), DeAndre Hopkins (Texans) and A.J. Green (Bengals) in his Top 5 of hardest to cover opponents.