Patriots like to bend the rules, Steelers defensive coordinator says 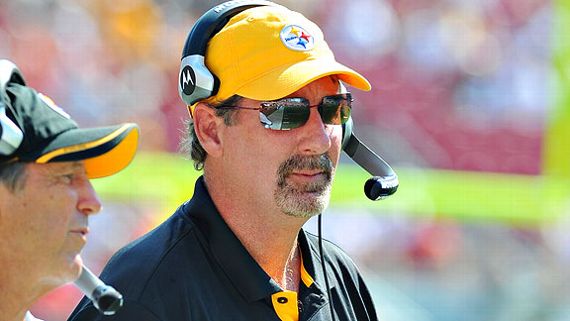 Pittsburgh Steelers defensive coordinator Kevin Butler handed the New England Patriots prime bulletin board material ahead of Sunday's showdown at Heinz Field. In an interview with Steelers.com, Butler essentially said that the Patriots bend the rules to win. You can bet Bill Belichick and company took note.

In a video that was mysteriously removed from the team's website, Butler made it clear that he feels the Patriots do things that border on illegal to get the upper hand, referencing the odd formations sometimes used in their offensive play calling.

"I think sometimes they do things outside the box sometimes, you know, that might be on the edge of being legal or not legal," Butler said in the interview, according to CSNNE.

The Patriots most notably used eligible/ineligible plays against the Baltimore Ravens in the playoffs two seasons ago and coach John Harbaugh called on the NFL to investigate the legality of the formations. The NFL found no issue with the plays.

"They’ve done a couple of things in the past — putting an offensive tackle out as ineligible but he’s not really. And so sometimes the emphasis by the NFL in terms of what they call and what they don’t call, they use that a little bit. And they’ve been accused of doing a lot of things," Butler said.

The Patriots overcame two 14-point deficits in that game against Ravens and won 35-31. Brady's message to the Ravens after the game was short and sweet: “Study the rule book."

Could the Steelers be the next team that Brady echoes those words to?