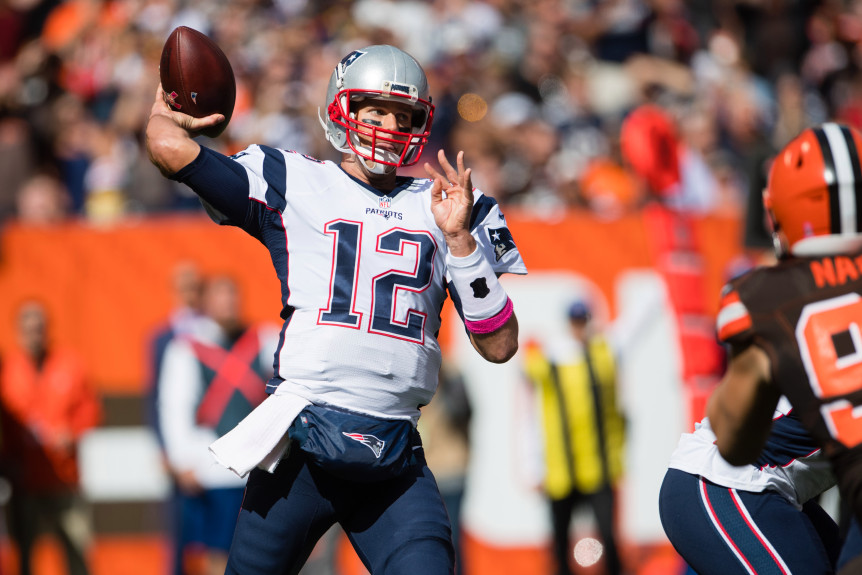 I think I say this on behalf of myself and all of Patriots Nation when I say, welcome back Tom.

In Brady's first game back since serving his 4-game "suspension", New England demolished the depleted Cleveland Browns, with every phase of the team performing extremely well. Granted, this was the Browns, and it was Charlie Whitehurst, or "Clipboard Jesus", at quarterback for a majority of the game, but Brady and the Pats showed the entire league why they are the perennial Super Bowl contenders.

On offense, this was the Tom Terrific show, starring Tom Brady, his two tight ends, and surprisingly Chris Hogan. Brady shunned any doubts that people had about him potentially being rusty after missing the first four games, going 28-40 for 406 yards and three touchdowns. While he did throw 12 incompletions, about 80% of them were drops by his receivers, namely Julian Edelman who had a tough day catching the ball. Luckily, Chris Hogan picked up the slack on the receiving front, going for over 100 yards on the day. He made a couple great catches on deep balls that were placed perfectly by Brady and showed some toughness after going to the locker room twice but returning both times after concussion checks. However, the tight end duo of Martellus Bennett and Rob Gronkowski were the real story of the day, combining for nearly 180 yards receiving and three touchdowns, all caught by Bennett. Everything on this offense was clicking seamlessly for most of the day, with the exception of LeGarrette Blount, who had a very quiet day. This is not entirely his fault however, as Josh McDaniels refuses to give up hope that on first and ten, Blount will make something happen. It hasn't worked this entire season, and defenses are beginning to pick up on it. If New England wants Blount and their ground game to succeed, they need to reduce the times he carries the ball on first down, and start to give James White some snaps in the backfield.

After a horrid performance against Tyrod Taylor and the Bills last week, the defense came into this game with a chip on their shoulder and something to prove. While the Browns did have three(!!!) quarterbacks take multiple snaps today, the Patriots played very well on defense, silencing the NFL's top rushing attack. Before today, the Browns were averaging nearly 150 yards on the ground; today, they were held to 27 yards by New England. Even though it is Cleveland, that has to be a huge morale boost for Matt Patricia and his defense, and they should only improve from here as they get healthier.

More game notes:
-Ryan Allen continues to impress after a rough start to the season
-Stephen Gostkowski missed a field goal for the third time in five games
-Martellus Bennett caught three touchdowns for the first time in his career
-James White looked solid running the ball
-Cyrus Jones was ejected for unnecessary roughness in the third quarter, continuing his rough start
-Rookie Elandon Roberts had himself a day, making tackles all over the field and should move up the depth chart this week
-The offensive line performed better than they have in previous weeks
-Special teams played terrific today, not allowing any kick return past the 26 yard line

Overall, this game played out exactly how everyone thought it would: a Patriots blowout. The Browns were never really close to grabbing a lead in this game, Tom Brady made sure of that, and New England's three phases played extremely well. This was a great sign for the Patriots moving forward, putting to rest any doubts that some people had after last week's debacle. Next week is the real test however, as the Bengals come to Gillette in Brady's first home game since last year's playoffs.