Sportsmanship not in Burfict's Vocabulary 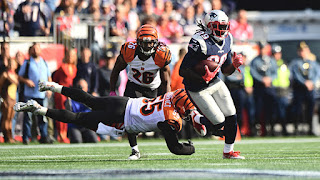 In Sunday's meeting with the Cincinnati Bengals, linebacker Vontaze Burfict's shot at Marcellus Bennett's knees was highly recognized and scrutinized by football fans around the country. But in a much less publicized event Burfuct made another attempt to purposely hurt a Patriot's player.

As LeGarrette Blount ran in for a touchdown, after trying (and failing) to make the tackle Burfict made an attempt to hurt Blount by stepping on both of his legs. Tom Brady, who was signaling behind the large group of men for the touchdown, seemingly noticed Burfict stepping on his running back's legs and pointed to the ref. Before the ref could do anything about it, Blount stood up and shoved the linebacker, who fell right into Brady, who quickly backtracked to stay away from the fight that was about to ensue.

The NFL is currently reviewing Burfict's actions and is expected to announce a pending punishment by Wednesday. What do you think, should Burfict be suspended or by issued a fine?