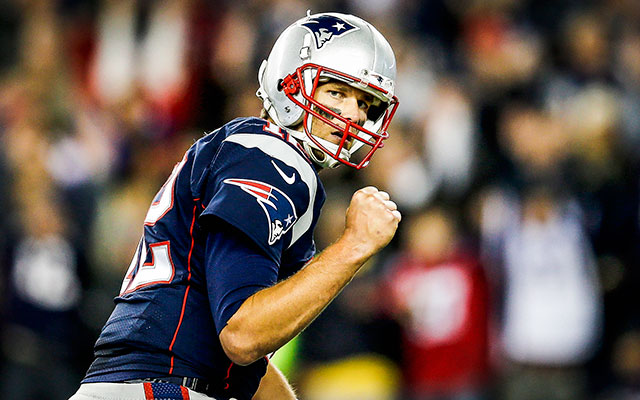 After returning to the Patriots from his four game suspension, I think everyone and their mother expected an angry, vengeful, and determined Tom Brady out on that field. Everyone expected great stats from the ageless wonder and for the New England offense to put up huge numbers. The weapons were there for Brady to succeed but no one quite knew how long it would take for Brady to fully embrace those weapons. Well, it's safe to say that no one, not even the biggest Patriots diehards, anticipated this kind of offensive outburst that could be the start of a record season for Tom.

Through his first two games, Brady has thrown for 762 yards, six touchdowns, and no interceptions, the first person in NFL history to do so (in his first two games of the season). His completion percentage is at an astonishing 76%, the highest mark in the league (min. 75 pass attempts), and his yards per attempt are sitting at a remarkable 10.43, also highest in the league, by far. Also, not that he needs another league leading stat included on his resume, he leads all quarterbacks in QB rating, with a 135.5. While TB12 has only played in two games, with one being against Cleveland, that shouldn't diminish the fact that his overall play has been nothing short of miraculous. Yes, he has more motivation than anyone else in the league, and the two teams he's faced thus far haven't been the toughest in terms of defense, but his accuracy and decision-making have shown us again that Brady seemingly only gets better with age, perhaps the most amazing stat of his illustrious career. Check out this perfect touchdown pass that he completed to Rob Gronkowski in the third quarter of Sunday's game:

That pass was in the smallest window possible, about a foot off the ground, and in the one spot that Gronk could catch it. It was one of the more incredible passes that I've seen Brady throw, and if anything it proves definitively that he hasn't lost a step, and doesn't look close to slowing down.

Tom is on pace for just under 4,000 yards and 36 touchdowns this season, numbers that some quarterbacks hope to achieve in full 16 game season; Brady might get there in 12. Those questions of rust and age seem to be far in the rearview mirror now, as many are finally realizing that this Patriots team is almost impossible to stop when Brady is on his game. It certainly helps that he has a full arsenal of talented offensive playmakers surrounding him, but I'm a firm believer that you could throw in a six foot tall high school receiver out on the field and Tom would mold him into a Pro Bowler within a few games.

All of the pieces are finally here for Brady: a deep threat (Hogan), dynamic route runners (Edelman, Amendola), matchup nightmares (Gronk, Bennett), and a solid run game (Blount, White). If you go back and look at all of the other Patriot teams since 2001, there has never been this kind of offensive talent around Brady, and Dion Lewis hasn't even made an appearance yet. With this arsenal and Brady performing better than he ever has, I think it's completely plausible to think that Brady can have his best overall season to date, and should be the frontrunner in the MVP race come seasons end. Here's hoping that Tom can keep shredding defenses and no injuries come haunting the Pats (knock on wood).