What can we expect from Rob Gronkowski this weekend? 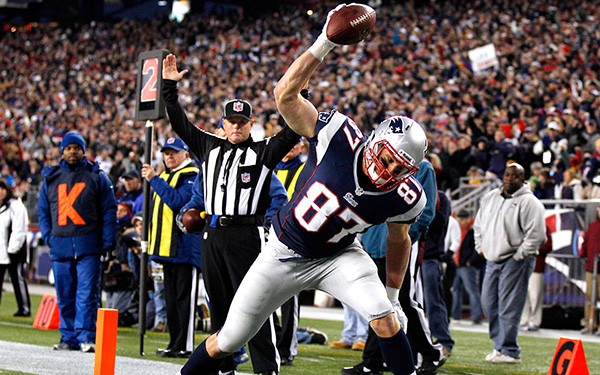 Two weeks ago, I made the homer mistake of playing Rob Gronkowski in fantasy against Houston, his first action of the season. I thought even though the Pats had a rookie at quarterback, that surely McDaniels would target him a couple times down in the redzone and that he would haul in at least one touchdown... Boy was I wrong. He ended the game with zero catches and only one target, which was basically a throw-away pass by Brissett in the endzone. After that fantasy debacle, I told myself, "Never again until Brady comes back, never again until Brady comes back." Well, after a week of holding strong while watching his projected score rise day after day, I broke down. I started him. And it was another disaster. He finished the game with one catch for 11 yards but to be fair no Patriot finished with over 30 yards receiving with the exception of Martellus Bennett, the tight end I should have started. However, this week, Brady is back. And Gronk posted an Instagram picture of one of his classic spikes and said: "Miss these. It's time to get turn't." I'd be stupid not to play him right?

With the return of Tom Terrific and the fact that Gronk seems to be back to normal in terms of playing time considering his post and injury progression, what can we expect from the big tight end this week at Cleveland? My assumption? Somewhere in the neighborhood of 50-60 yards receiving with his first touchdown of the season. Everyone knows that he and Tom Brady (who he also posted about today on Instagram) are one of the most prolific quarterback-receiver combos in the NFL today and maybe in history. Their chemistry on the field is unmatched, and the outburst of Martellus Bennett these past two weeks will only aid Gronk in eluding coverages and getting open. And the fact that these two tight ends will be on the field at the same time in the redzone for the majority of the time means Gronk will be getting more targets than he ever has. All the pieces are present for #87 to break out for the first time this season, along with a lot of other Patriot receivers because I hear the new starting quarterback is quite good.

Note: If you have Gronk on your fantasy team, I'd play him for the simple fact that you'll regret it deeply if he really does go off for 12-13 points and he's riding your bench.