Winners and Losers: Patriots at Buffalo

What a game! The Patriots got their revenge against the Buffalo Bills for the shutout they received earlier this season, and it was historical. Gronk recorded a record touchdown, Gostkowski didn't miss a kick,and Bill Belichick proved once again that he is the only Bill that wins in Buffalo.

Winners
Rob Gronkowski
What a day for Rob Gronkowski! He played in front of his hometown and set a Patriots touchdown record. Gronk brought in his 69th career touchdown which is the most in Patriot's franchise history. Gronk was pretty excited about getting the number, and apparently so was Momma Gronk. He said after the game that she told him "I'll be so proud of you when you score your 69th touchdown." Gronk also racked up 109 yards on the day. Next on Gronk's to-do list? Score 420 points, which he could very possibly do after the bye week with just one more touchdown.
Josh McDaniels
You have to give credit where credit is due. McDaniels had an excellent day of play calling today. He had Tom Brady spreading the ball around to all different receivers throughout the day that Buffalo didn't know who to defend. Brady threw for four touchdowns all to different receivers (Danny Amendola, Chris Hogan, Julian Edelman, and Rob Gronkowski) and LeGarrette Blount also ran for a touchdown. With the Patriots having so many options on offense, it opens up the playbook, which is exactly what McDaniels did today.
Chris Hogan 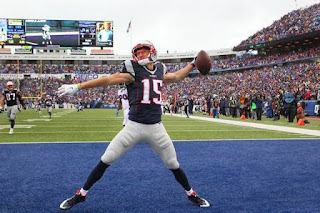 Chris Hogan returned to Orchard Park for the first time today since signing with the Patriots in March. In his return to Buffalo, Hogan snagged a beautiful 53 yard touchdown pass from Brady and finished with 91 yards. Hogan has proved to be a great addition to the Patriots offense this season.

Nate Solder
Solder had a rough outing today. He gave up three sacks to the Buffalo defense, and had many wondering if he was trying to get Brady killed. Hopefully the bye week will get Solder some rest and have him ready to go for the second half of the season.
Patriots Pass Rush
Let's be honest. The Patriot's pass rush this season has been hurting without Chandler Jones. They have not had the ability to explode off of the offensive lineman and attack the quarterback like last year. the opposing quarterbacks have way too much time to wait for receivers to get open. Hopefully the bye week will allow for some improvement on the pass rush and be ready to face Seattle.