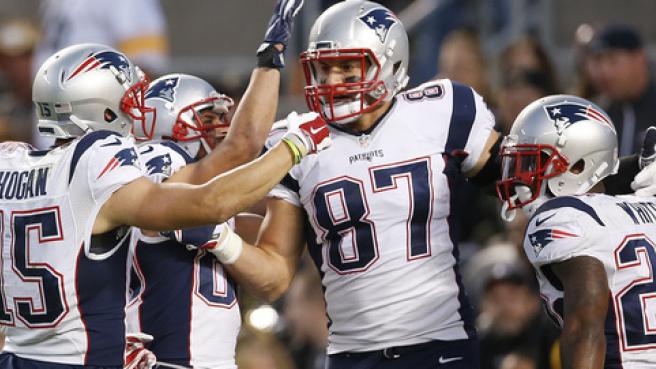 Tom Brady shredded the Buffalo Bills on Sunday in Orchard Park, leading the New England Patriots to 41-25 win. In improving to 7-1, Rob Gronkowski accomplished a major milestone and Stephen Gostkowski silenced the critics, as the club got sweet revenge on their divisional rival.

Brady tossed four touchdowns and made Rex Ryan's defense look foolish in doing so. Brady connected with Danny Amendola and Chris Hogan in the first quarter, Rob Gronkowski in the second quarter and Julian Edelman in the third quarter.

The touchdown strikes to Amendola, Hogan and Edelman marked Brady's first three scoring connections with a wide receiver since returning from suspension. Brady's most impressive throw was a 53-yard touchdown that he lofted over the Bills defense to Hogan with the rush in his face. The touchdown to Gronkowski also went for 53-yards.

Gronkowski's score set the all-time Patriots touchdown record. With 69 now to his credit, Gronkowski is the only tight end to ever lead an NFL franchise in total touchdowns.

After missing extra points in back-to-back weeks, Gostkowski bounced back in a big way. He nailed all four of his extra points this week and also added a pair of field goals, one of which came from 51 yards out.

New England's defense limited the Bills to just 209 yards passing. They allowed just two touchdowns and both came via the ground game. One of the scores came in garbage time with just 30 second left in the fourth quarter.

The Patriots will get a bye next Sunday. They sit atop the AFC with a 7-1 record.