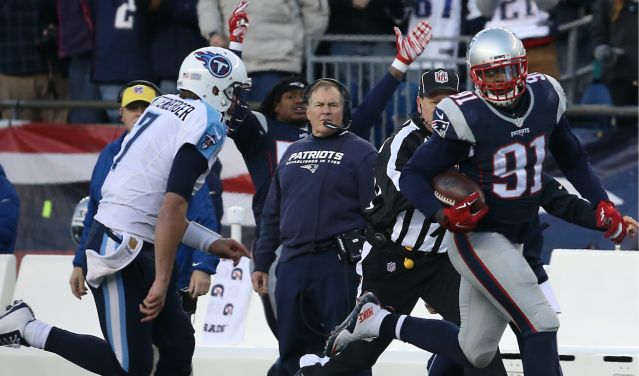 Everyone was shocked to hear that the New England Patriots decided to trade arguably their best and most versatile linebacker Jamie Collins to the worst team in football, the Cleveland Browns. It's not just the fans who were stunned, so were the players in particular Tom Brady and the offense.


“It’s always tough to hear news like that with a teammate that I’ve played with and been in so many battles with. Jamie is a great player for our team and I’m sure he’ll be a great player for the Cleveland Browns,” Brady said during his weekly appearance on Westwood One Radio.

“I’m always sad when we lose a player that I like and someone that I respect like Jamie. It’s a tough day, but it’s part of the NFL, this business. Coach Belichick makes these decisions and we as players still have to go out and do our job. That’s enough of a challenge as it is. We’re in a bye week now, we’re at 7-1 so we’re in a decent place, and we have our whole season ahead of us.”

Also Devin McCourty said what he thought about trading the Pats best defensive player, on his appearance on ComCast SportsNet New England.


“Jamie’s a huge piece of our defense, arguably our best defensive player,” McCourty said. "So it’s going to be a lot of changes that come from this move, and as players, that has to be our focus -- how do we fix things and get things going in a positive direction."

This isn't the first time this has happened under the Belichick regime. You look straight after the championship winning season in 2003, Lawyer Milloy was cut. Then trades such as Deion Branch (2006), Max Vrabel (2008), Richard Seymour (2009), Logan Mankins (2014) and Chandler Jones (2016). I think the real surprising one is that Jones was traded to the Cardinals and now trading Collins in the same year. That is 2 out of 3 of the key linebackers on the Patriots defense traded away with only Dont'a Hightower left. This is now the time for Elandon Roberts to step up into the spotlight.