McDaniels and Garoppolo: a package deal? 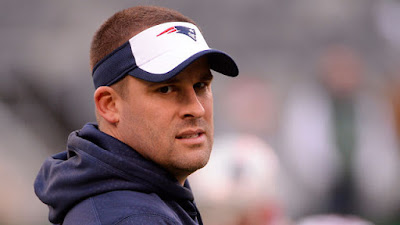 "Black Monday" in the NFL is still a week away, but the proverbial rumor mill is at full speed.

Josh McDaniels, a favorite on the NFL coaching vacancy rumor circuit, is said to "likely" be leaving New England this offseason per Ben Volin of the Boston Globe. Furthermore, Volin reports there are also rumblings of a potential package deal involving 3rd year QB Jimmy Garoppolo.

Hold up. We've heard this before.

In 2009, McDaniels' departure from Foxborough stirred up wild rumors involving a 3-way trade between the Broncos, Patriots, and an mystery that would result in Jay Cutler being ushered out of Denver, and Matt Cassel taking over as the Mile High starting QB.

A McDaniels-Garoppolo "package deal" is an easy leap to make, which is why it has to be discarded so quickly. McDaniels has made no secret of his desire for another shot as an NFL head coach. What head coach wouldn't want a personally groomed QB, still on his rookie deal, to start fresh with? One who has already shown the ability to win at the highest level?