Pump the brakes on anointing the Ravens 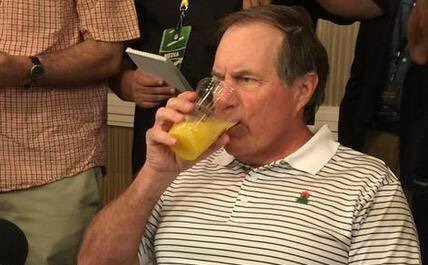 Calm down Patriots Nation. You seem stressed out. I’m going to lead you in an exercise to help you relax. If you answer yes to any of these questions, you need to participate in the exercise:
Do you think the Ravens will be leaving Foxboro on Monday with a victory?
Are you anticipating Timmy Jernigan and Brandon Williams stuffing the New England running game?
Are you having nightmares of Mike Wallace double-moving Logan Ryan, or Terrell Suggs sack-stripping Tom Brady?
Furthermore, do you think the Patriot's championship chances are doomed for any of these reasons?:
A. They haven't been tested because of their weak schedule.
B. Stephen Gostkowski is having a rough year.
C. Injuries to Eric Rowe and Danny Amendola are too crippling.

For the portion of Patriots Nation that hasn’t gone to the dark side quite yet, be careful. There is a lot of nitpicking out there this week. Know a Patriots nitpicker when you see one, and know what a "negativity trap" traps sound like. Here's what it will look like:
You go to your local bar with a group of buddies. There's that one guy who isn't that tight with everyone else because he's just a co-worker of one of your friends. You've met him before and you can't remember if his name is Brett or Brent, so you can't commit. He brings up this Monday night's game and says something like, “man, this Ravens team is HOT though! That defense is NASTY, and our defense is just really average…”. THAT is the nagivity trap. He's a nitpicker. The only way to deal with a nitpicker is to roast the dude with some facts.

Negative Bar guy (NBG): The Patriots schedule has been soft.
Facts: Yes, it has been, but their two losses are at home against Buffalo with Jacoby Brissett at QB, and at home against NFC #2 seed Seattle in a contest that came down to the final play. The Ravens lost 4 in a row from weeks 4-7. Losses to Oakland and Washington in Baltimore were followed by losses to the Giants and the (*clears throat*) Jets. When they faced a top team, Dallas rolled them 27-17.
NBG: Who have the Pats beaten? They didn’t have to play against Big Ben!
Fact: Well, they beat the Jets for starters. Baltimore played Ben Roethlisberger the week he came back, which was, per usual with him, two weeks too early. Among their other victories are a 2-point win over Jacksonville, and a 5 point win over a depleted Cincinnati team that the Patriots demolished when healthy, and a couple of wins over the still winless Browns.
NBG: These Ravens can really air it out though. I heard on the radio that only the Saints throw it more than them….
Facts: This Baltimore offense is bad. They are 21st in points per game, 20th in first downs, and the Rams are the only team with a lower third down conversion percentage.
NBG: Ok, ok, but their defense in #1 in the league!
Facts: The Patriots defense is tied with Baltimore for 2nd in points allowed per game. Also, Tom Brady is 6-0 at home in his career against #1 ranked defenses.