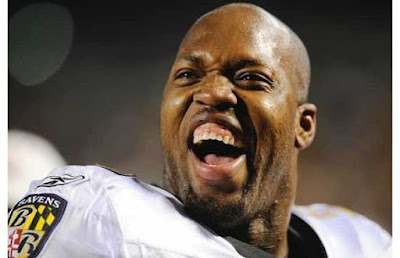 Waddling through the tunnel on his way to the visitor's locker room with his tail between his legs after a 30-23 loss, Terrell Suggs momentarily lost his grip on reality.

Suggs: "they better hope they don't see us again"#BalvsNE pic.twitter.com/bEKDPKYLko

It's pretty awkward when your teammates just keep on walking without acknowledging you. Maybe it was the fact that Suggs only notched half of a tackle on the stat sheet in the loss.

Now on the outside looking in on the AFC playoff picture, the Ravens sit a game behind Miami in the wild card. The road doesn't get easier for them. They host Philadelphia next weekend before finishing with two intra-division road games at Pittsburgh and Cincinnati. It doesn't appear as if they Patriots will have to "hope" to avoid the Ravens.

Given Monday night's performance, I'm sure the sentiment in the Patriots' meeting rooms is quite the opposite from Suggs. Aside from two special teams blunders leading to a pair of short-field 3rd quarter touchdowns, the Patriots controlled much of the game as the defense stepped up and had its best showing of the season.

Malcom Brown's 1st quarter safety at the Baltimore 1-yard line set the tone. Led by former Arkansas Razorback Trey Flowers and grizzled veteran Rob Ninkovich, Matt Patricia's stable of edge rushers confused Joe Flacco with their looks all evening, forcing check-down after check-down. The Ravens were 6 for 16 on 3rd down in the game and rushed for only 42 yards, attempting just 4 carries in the first half.

Malcom Butler had yet another standout performance. PFF's 5th ranked CB was only thrown at 4 times, allowing 31 yards. He also had a redzone pass break-up and made the critical stop on Dennis Pitta's 3rd down catch in what was Baltimore's final offensive possesion.

Rounding into form at the right time, the group's defensive rankings held steady at 2nd in points allowed per game, and they now rank 9th in yards allowed per game. The unit now prepares for an underwhelming Broncos offense Sunday at Mile High Stadium.