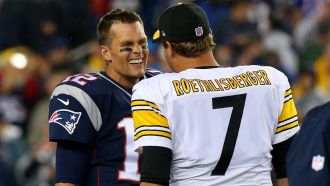 It looks like the Patriots really broke the Steelers.

Not even two full days after the Steelers got smacked around by the Patriots in the AFC Championship Game, linebacker Bud Dupree looked like an idiot by saying the Steelers weren't ready for the Patriots' offensive attack, and quarterback Ben Roethlisberger is thinking about retirement.

"I'm going to take this offseason to evaluate, to consider all options, to consider health and family and things like that," Roethlisberger said on KDKA-FM in Pittsburgh. "Just kind of take some time away to evaluate next season — if there's gonna be a next season — all those things. At my point in my career, my age, I think that's the prudent and smart thing to do every year."


Even though Roethlisberger is still playing at a high level, he's had a ton of injuries in his career and he's 34 years old. So when you put it in that context, seeing him retire may not be as crazy as it sounds.

This will no doubt be a big story throughout the offseason, as Roethlisberger is the winningest quarterback in Steelers history and should be apart of anyone's Steelers quarterback-themed Mt. Rushmore.