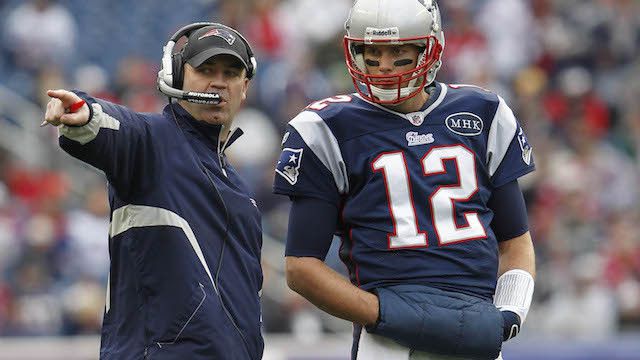 If you're not Bill Belichick and you're coaching Tom Brady, arguably the greatest quarterback to ever play professional football, how do you handle it?

I'd constantly crap my pants, but that's why I'm not a coach.

Coaching any football player probably isn't a walk in the park, and you'd have to imagine coaching Brady would be really tough considering how meticulous he is. Bill O'Brien would certainly agree with this.

“Josh McDaniels is one of my closest friends and we talk about this all the time," O'Brien said, via CBS Houston. "One of the most difficult jobs you can have is coaching Tom because he wants to be coached, you coach him every single day, every minute of the day and all year round because he’s all football.

"He’s a phenomenal guy and the reason why he is what he is, is because he’s obsessed with football. He’s a great family guy, don’t get me wrong, but he’s obsessed with football and so when you’re coaching him you better be ready to go at a moment’s notice whether it’s for a meeting, or practice or game and it made me a much better coach when I was fortunate enough to coach him."


As you may remember, O'Brien was New England's offensive coordinator in 2011 when the Pats went to their second Super Bowl against the New York Giants and lost. That season famously featured an on-camera bitch fest between Brady and O'Brien, which has become a minor highlight in Brady's career.

As an aside, I need a gif of Brady clearly screaming "no shit." I would use it daily.

Despite that incident, O'Brien and Brady have maintained a good relationship. However, it wasn't until O'Brien left for Penn State that he truly realized how great Brady is.


“When I went to Penn State after having coached Tom (Brady) for a few years that was my first eye opener," he said. "We went out for out first spring practice at Penn State and I was like, alright we’re going to do these 100 plays today and I think we were like 1 for 30.

"Now, there was a high wind that day in Happy Valley so I blame it on the wind (laughing), but guys didn’t know where to line up and it was like, what am I doing?! So we simplified it and began being decent offensively that first year, but that was my first experience of knowing it’s different.”


Even Belichick has said before that Brady is tough to coach, so I imagine this would be the consensus among others who have coached him. It really shouldn't be surprising, though, given Brady's stature. Luckily for O'Brien, he has had some success with less-than-average quarterbacks in Houston, where he is currently the head coach of the Texans.

That speaks to the job O'Brien has done, as he has implemented a lot of what the Patriots do into his offense.