Which Patriots players will benefit from Julian Edelman's devastating injury? 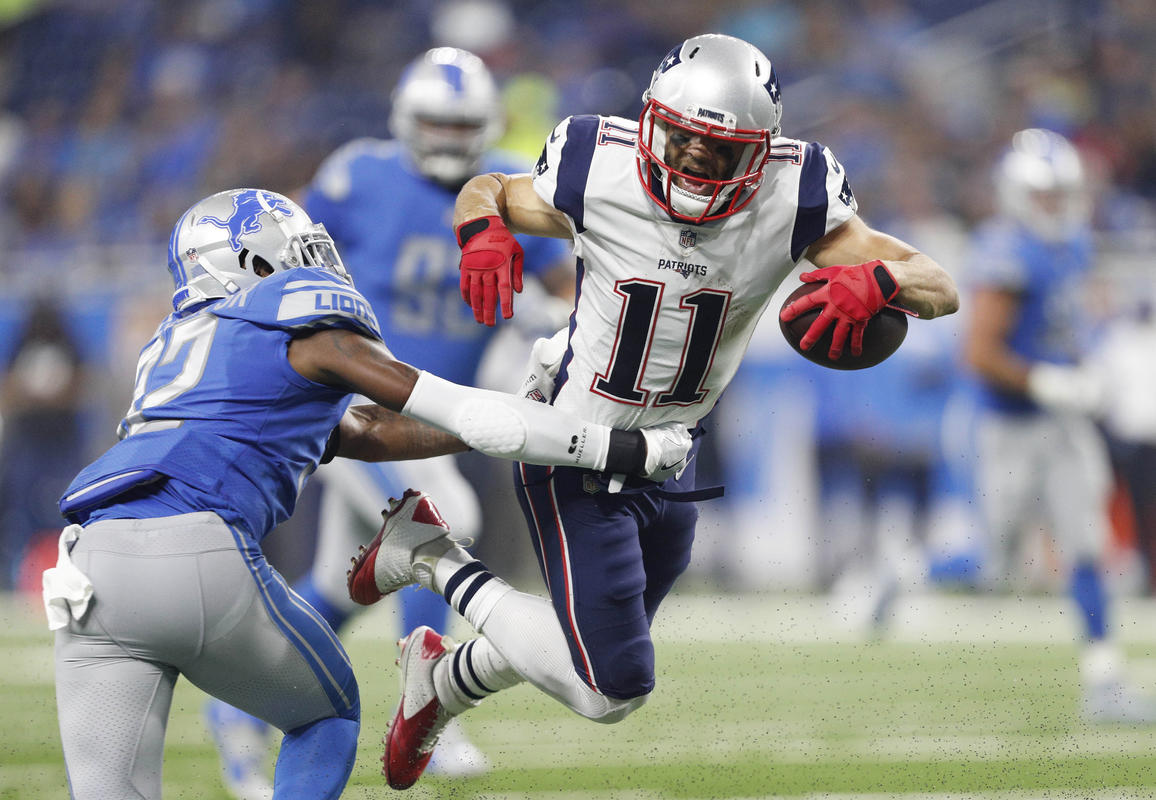 I still feel sick to my stomach thinking of the way Julian Edelman's season had to end. He put in the work and waited for his time and is now a two time Super Bowl Champ and one of the great receivers to ever put on a Patriots uniform. As he has always done, this latest setback will only push the undersized receiver to be stronger when he returns for the 2018 season. At this point, Patriots fans must (sadly) move on and realize this injury does not mean the season is a lost cause. The Patriots are still favorites to reach the Super Bowl in the AFC and have plenty of weapons to be a potent offense. Lists are a fun offseason exercise so I would like to look at the 5 players who should benefit most from Edelman's absence in the huddle. If you havn't had your fantasy draft yet these 5 players could be contributors or sleepers on your squad.

5. Rob Gronkowski
Yes I understand that he was already going to be a main cog in the Patriots offensive machine but he must take extra responsibility with Edelman out. Edelman was the guy Brady always looked to on third down or when he was under pressure and I believe Gronk is the guy who must fill this void. He is a mis-match on pretty much every play and should receive an increase in targets on third down with Edelman out for the year. A healthy, explosive Gronk can fill the role of third down target perfectly because of his athleticism, size and reliable hands. A healthy Gronk= a happy Brady this season. He is only number 5 on this list because his role on the offense was already massive.

4. Danny Amendola
He has taken on a smaller role during the regular season in recent seasons because of concerns over his long term durability. He has been a remarkably clutch player in the playoffs so the Patriots have been smart in saving his best play for the games that matter. I don't see Amendola taking on tons of added responsibility but Brady did mention Amendola first when discussing how to replace Edelman. He's similar to Edelman in that he has been around Brady for years now and is well within Brady's trust circle. Trust is paramount to the Pats QB and Amendola will need to step up and contribute in those clutch, third down scenarios as discussed with Gronk. It is hard to see Amendola's play time increase drastically though as the Patriots will still be cautious during the regular season but he still offers trust which Brady covets.

3. Brandin Cooks
Cooks was already seen by many to be the number one option in the Patriots wide receiving core. Looking at the stats in the preseason game against the Lions might have changed some peoples minds about his potential role in the offense. Cooks only had 1 catch for 8 yards on two targets in a game which often resembles how the regular season will play out. Edelman and Hogan took a majority of the targets while Brady was in the game. Trust is obviously paramount for the Cooks and Brady connection but the most targets that Edelman would have seen may go to Cooks. He stands to play far more than Amendola and his talent may force Brady to establish trust more quickly. Edelman's 160 targets from last season have to go somewhere and fantasy owners of Cooks will pray many more go to the speedy receiver.

2. James White
This number two spot could be reserved for all the running backs but I am putting White as the face of that group because he is in the Brady trust circle. White accumulated 60 catches last season and now with Edelman out he may even eclipse that large number for a running back. White has been optioned out into the slot at times and has looked comfortable catching balls in that position. White's versatility will be the main reason he will be utilized more often in the offense. The Pats could also use more two running back sets and pair White with either Dion Lewis or Rex Burkhead and use these versatile backs as matchup nightmares. However the Pats decide to use the running backs, these three will be supremely important to Brady because of how often he targets running backs.

1. Chris Hogan
Hogan showed last year what he could accomplish with a top flight quarterback and his ceiling may not have been reached yet. The now second year Patriots receiver could be in for the most increased role after Edelman's knee injury. Gronk will be Gronk, Amendola will still see limited snaps, Cooks is still building trust with Brady, running backs have always seen targets in this offense and Malcolm Mitchell has injury concerns so that leaves Hogan as the guy to take up the most responsibility. It was clearly visible in the preseason game against the Lions where he caught two touchdowns and was on the same page as Brady. On the first touchdown Hogan ran a beautiful option route which showed that he and Brady are on the same page in reading defenses. That play will go a long way in further establishing trust between the QB and Hogan. Hogan is more versatile than Cooks from the receiver position because he can be a deep threat on the outside, play out of the slot and run the previously mentioned option routes. Hogan had an excellent first season with the Patriots but could be in line for a huge bump in production with Edelman on the shelf.

All 5 of these players (plus Mitchell, Allen, Burkhead and Lewis) should add to their roles in the offense. The next man up mentality will ensure the offense won't miss a beat without Edelman!

Follow me on twitter @jakescearbo to talk more about the Patriots offense post Edelman. There are many candidates for increased production without the quick slot receiver and would love to hear what others people think. Check out my website at jakescearbo.com to read more pieces written by me!