Ranking the Chicago Cubs on their Patriots jersey selections

This past weekend the Cubs were on a road trip to Pittsburgh and they decided to put a spin on their wardrobe. The theme was simple, wear your favorite NFL jersey. How did it shake it out?

Tell us all about your fantasy football team. pic.twitter.com/QzePJkMNwi
— Chicago Cubs (@Cubs) September 3, 2017

Four Cubbies decided to wear Patriots jerseys, making our boys the most represented NFL team. Duh. The Cubs are the defending champs. They get it.

The rankings are a no brainer. Coming in dead last is Quintana in his TB12. Nothing against Tommy. He’s the premiere Boston athlete of his generation and the GOAT. Can’t go wrong draping that laundry over your body any chance you get. But with an opportunity to show some personality, picking a Tom jersey is just like Quintana’s fast ball when he plays the Sox, right down the middle. The reason he isn’t in a tie for dead last is because he went with the road whites. In a city with 3 ICONIC jerseys, sadly the Patriots’ work clothes don’t stack up. They’re garbage. But AT LEAST wear the blues. They’re a little easier on the eyes.

This brings me to third place. Juan Cabreja with his blue Brady. See the paragraph above for his low ranking, but he had the common courtesy to not assault my eyes with the road white. Thank you.

Second place is Rondon and his Gronk jersey. To be honest I was going to consider putting Gronk last because he’s a boring pick as well. It’s almost like Tom’s jersey is about to come back around to being cool. It was molten lava hot in ’01. Then it became #basic by ’04. But now? He’s been around so long and accomplished so much that it’s pushing its way back towards cool. I feel it wont be all the way there until he retires, but that’s me. I don’t have a Brady jersey in my stable yet, but I’m breaking the bank on one when he hangs up the cleats. Gronk is unfortunately stuck in the middle of pink hat territory, and he has a ways to go before it comes back. The only reason I gave him the nod for third is the color rush aspect. Some of the color rush jerseys were cool and some were puke worthy. Ours was in the upper half, and certainly better than our normal shirts. They looked a little bit too much like Ole Miss for my liking, but you can’t win em all. However, someone made this picture of us in the color rush but with a white helmet and DAMN. That is flames. 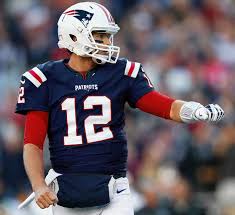 Anyway, the color rush choice shows me you can be topical and you have a bit of class.

But the gold medal, in a blood bath, is La Strella wearing a McCourty. Such a vet choice. Dev obviously isn’t a no name, but that’s the kind of selection that tells me you aren’t a sheep. You’re a wolf. Willing to separate yourself from the masses and pay homage to a man who patrols center field just like you wish you could you utility infielder you. I’ve always said the girl you want to go home with isn’t wearing a Big Papi jersey. She has on a Trot Nixon jersey T-shirt with a few stains. That’s my girl. Tommy La Strella, you’re my girl.