Week 3 Awards and Grades: How confusing is this Patriots team? 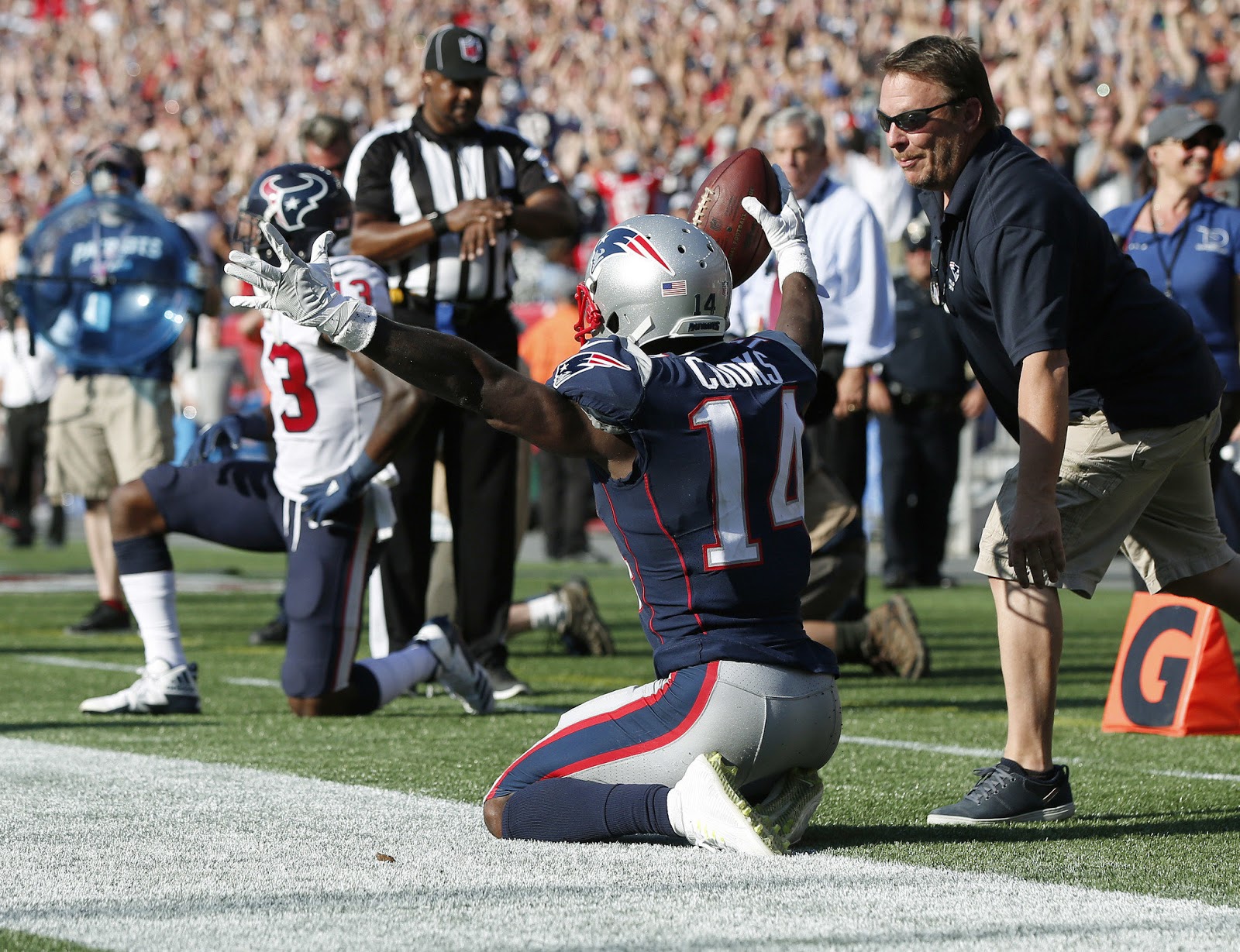 Another wild game in the books for the Patriots yesterday after a thrilling 36-33 victory! Tom Brady has done the impossible again of course. The whole slate of football was enthralling and worth watching despite all the protesting. If you are a real football fan, the actions of players, coaches and GMs shouldn’t stop you from watching the game of football. There is a lot to digest from this stunning comeback victory so lets jump into the awards! If you missed weeks 1 and 2 award blogs here they are.
Week 1
Week 2

It took far too long for this much-anticipated duo to show how deadly they can be but they were locked in against the Houston Texans. Cooks ended with 5 catches for 131 yards and 2 touchdowns, including the game winner with less than 30 seconds left. The game winning catch was an amazing play by Cooks who needed perfect concentration to make the catch and get his feet in bounds. Dude has awesome hands. Cooks showed how he could be versatile in the Patriots attack, catching deep balls, in routes on hard play action looks and when the defense was playing him deep, he cut of his routes and Brady found him. He did all this damage on only 7 targets which makes it all the more impressive. Brady and Cooks were finally on the same wavelength and Cooks got enough targets to be effective. The Patriots offense has been using far more big plays this season and Cooks is the main reason the offense has looked incredibly explosive at times.

Tom Brady attempts a deep pass on 20% of his attempts, the highest rate in the NFL and has the second highest passer rating on them (145.8).

Hopefully Cooks can continue this strong play into next week against a Carolina Panthers team that got torched by the Saints yesterday. More on Brady later because of course he had to win an award from that performance. That Cooks-Brady connection was too nice.

Most Likely to Succeed on Offense: Danny Amendola
It was great to see Dola back on the field after missing week 2. He must be a calming presence for Brady in the pocket. He only finished with a line of 3 catches for 48 yards but his presence often doesn’t always show up on the score sheet. He was excellent in returning punts, averaging 26.5 yards in his two returns. He put the Pats offense in great field position in both of those drives, which doesn’t always get talked about. Most importantly, he is the ultimate clutch player. On the final drive, it was third and 18 from around midfield. Brady made a rainbow throw towards the right sideline and Amendola went up to make a great catch in tight coverage. It set up the Cooks touchdown on the next play and the victory may not have been secured without that catch. Having guys like Dola that you can count on is piece of mind for Brady and the offense as a whole.

Most Likely to Succeed on Defense: Malcolm Butler
The defense was BAD against the Texans and rookie QB Deshaun Watson. There was tons of talk in the lead up to this game about Butler losing his starting role and how he would respond and boy did he ever step up. Stephon Gilmore ended up with a pick in the game but he missed a bunch of snaps with some dehydration issues. Butler was on the field the whole game and only allowed 2 catches for 10 yards.

Butler was back to his ole reliable self, which will be important for the defense that is trying to establish an identity. This shouldn’t be surprising that he bounced back since he is one of the hardest working, most mentally tough players on the roster. I expect him to get an interception on Cam Newton next week.

Gritty Player of the Week: Trey Flowers
This was a tough one to choose because the offensive line was garbage and the defense couldn’t contain Watson for a second. Flowers ended with a sack and 3 QB hits while fighting through constant double teams. He hasn’t been brought up a ton on the live broadcast but he is grinding out there as the best D lineman on the team and he opens up opportunities for Deatrich Wise and Cassius Marsh to be 1 on 1 in passing situations. When the defense inevitably figures out a scheme where they can be successful, Flowers is going to be a main cog in that success.

Most Athletic: Brandin Cooks
Obvious choice here after he was the best receiver on the field. As mentioned earlier he had 7 targets, which is a big improvement from weeks 1 and 2, but I would like to see him get closer to 10. He seems to be lining up mostly on the outside but I would like to see him work a little in the slot and try to utilize his speed on some crossing patterns. I loved his first touchdown play where they sold hard play action and found him in the middle of the field and let him use his wheels all the way to pay dirt. Wide receiver screens must not be his forte because they haven’t used him in that situation once. The team paid a steep price to get this guy so I think they should be using him in more situations and get him the ball in space more. The offense is still figuring out its kinks just like the defense so Cooks should only continue to improve and show off that track star speed.

Class Clown: The Whole Defense
The Patriots are currently allowing more than 30 points per game in the first three weeks, which is the worst in the league. They have allowed Alex Smith and Deshaun Watson to torch them. It’s bad, very bad. It seems as though the defense isn’t playing as a cohesive unit and not every player is doing their job. For example, the Texans designed a few QB draws for Watson on third down and they were successful in doing so. The Patriots for sure practiced defending Watson’s running ability but no player was ready to step up and stop the QB from running. Kyle Van Noy and Elandon Roberts are to blame for these mistakes. The defensive line hasn’t sustained any sort of pressure over the game and Watson looked comfortable in the pocket. It falls on the secondary to be playing man coverage for up to 5 seconds or more, which is incredibly difficult. The running backs gashed the Pats catching the ball again this week, which is another massive issue. The coaching staff is still learning what players do best in what situations so they will improve, as they showed against the Saints. Getting Dont’a Hightower back will hopefully push players into roles that they can succeed in so lets look for some improvement next week with the star linebacker back on the field. Either way, it’ll be up to this defense to decide how good this team will be because Tom Brady can only make so many remarkable comebacks.

The “how many times can Brady be hit” award: The Offensive Line
This result was nothing surprising to be honest when the o-line was missing Marcus Cannon against a talented Texans front. JJ Watt, Whitney Mercilus and Jadaveon Clowney are one of the best trios in the league. Brady was sacked 5 times and under pressure much of the afternoon. He was stripped three times and lost one of those fumbles, which Clowney took back for a touchdown. The Texans would have easily won if they recovered another fumble. This should be an outlier game when missing their best offensive lineman but its never good to have your old man QB getting hit that much and that hard. Clowney almost murdered Brady on his first sack of the game. This o-line isn’t a long-term issue but congrats to those 5 on attempting to let huge athletic men kill your hall of fame QB.

The Comeback King: Tom Brady
That was such an amazing last drive. Brady can do no wrong. Any other fan base would have thought that game was over before the last drive started but not Patriots fans. We have seen enough over the years to know that Brady plays his best in crunch time. He proved yet again why he is the best QB to ever live. 378 yards and 5 touchdowns while getting beaten up by the Texans front is insane. That Cooks throw to win the game was one of his 10 best in his career and put in on the absolute money where only Cooks could haul it in. On a day where the defense didn’t have their best effort, Brady brought his and willed his team to their second win of the season. Sometimes opposing teams just need to tip their hat to the GOAT and this game was one of those games. He stole that one right out of Bill O’Brien’s insane looking butt chin. Brady is a living legend and showed why he is still the best QB in the league.

Grades:
Offense: A- (QB=A, RB=C, WR=A)
Defense: F all around yet again
Special Teams: B (Ryan Allen had some shitty punts)

Check out my website at jakescearbo.com for more pieces on the Patriots! Thanks for reading and hopefully the defense will grade out better next week!