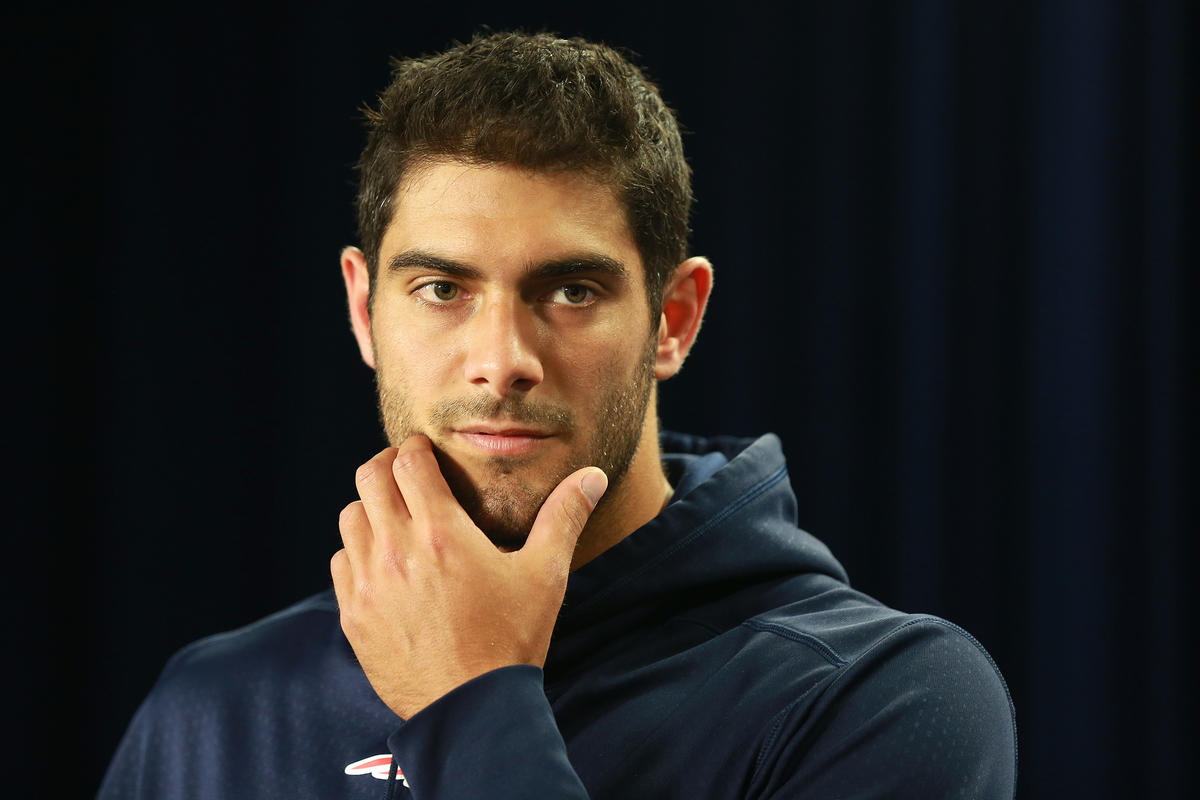 This has been a quirky year in the NFL because no team is actually that great. There are a few awful teams, a tiny minority who look to be the cream of the crop and the vast majority of teams are swimming in mediocrity, with an opportunity to make a run at a playoff spot. This has created a weird amount of action around the NFL trade deadline which is normally quiet.

Jay Ajayi was traded from the Dolphins to the Eagles this morning. Left tackle Duane Brown was traded from the Texans to the Seahawks yesterday. Most shockingly though, was Jimmy Graoppolo being traded from the Patriots to the San Francisco 49ers for a 2018 second round pick. Nobody could have predicted that swing, not even writers who have followed the team closely for years. It's one of the more shocking trades during a Belichick era that has been filled was unpredictable moves.

Belichick spoke about the deal today and shed some light on the craziest deal in recent memory. Those who were freaking out on twitter last night better listen up and read his comments closely.

Here is his statement:

“His career is moving forward. He’s a talented individual. He was a great person to coach. I met with him weekly and again, have a tremendous amount of respect for him. As his career moves forward we have to look to our team — both this year and beyond. That is the direction we have to take.

“We probably had the best quarterback situation in the league for the last, call it 2.5 years. It’s just not sustainable, given the way things are set up. It’s definitely not something we wanted to walk away from, and I felt like we rode it out as long as we could. Over a period of time we explored every option, every possibility to try and sustain it, but just at this point felt like we had to make a decision.

“It’s a very complex situation on multiple levels and this is really the last window that we had and we did what we felt was best for the team. There were many things involved in this whole process, and again, on a number of levels -- way too many to get into at this time. I’m definitely not going to get into any conversations that took place regarding the trade or with the player. This is a decision involving Jimmy and some form of a decision that has been looming for the last couple of years.

“I’m sure a lot of you have questions that are fair, but again, to try and put the whole puzzle together, and there are so many different points in time that would and could change the entire conversation that it is just a too complicated of a process and too unique to get into in-depth. I am not going to answer questions about the transaction and all the follow ups that would be coming with them, which are fair questions, it’s just not possible.”

He didn't answer any follow ups so we will never see the entire picture but this delves into Belichick's mindset on this deal.

First of all, Bill found Garoppolo just as attractive as we all did. That dude busted his ass off as the backup for years and proved his worth to Belichick. He has earned this starting role and has a great coach in Kyle Shanahan, who will be the perfect fit with his skill set. Patriots fans should be really excited to see Jimmy G get a chance to start for the whole season.

Per NFL Reference, Jimmy Garoppolo is the most handsome player to be traded, at any position, since the merger. pic.twitter.com/WEkdDXVKOU

The timing seemed odd because a day didn't go by in the offseason without some sort of discussion about trading Garoppolo and what the Patriots would do with their amazing QB situation. Why not flip Garoppolo before the draft for a steep price because the quarterback class for the 2017 draft was weak? Why wait until the deadline and get less value?


When #Browns made an offer for Jimmy Garoppolo during the draft, they didn’t offer a 1st. Just a 2nd & change. Pats wait & take this deal.

Turns out, Belichick waited and didnt lose much value at all. The 49ers pick will be at the very top of the second round which is a pick that Belichick loves. Additionally, he had the insurance policy of Garoppolo for the first 8 weeks and decided that Brady is still the present and future quarterback. It seemed like a rash move but Belichick noted the complexity of the situation. He had to balance the huge price of re-signing Jimmy at the right price as a backup, ensure Garoppolo would sign the deal and be happy making many millions as a backup and also determine whether Brady could handle many more years of being the starter. It all came together at the right time and seems like the correct move since Garoppolo wasn't going to sign the extension and wanted to start elsewhere.

Jimmy G has a great run as the most promising Patriots backup of the Brady era. I wish him all the success in San Francisco and hope this move pans out for the Patriots and 49ers. This was an inevitable reality that Belichick has been facing for years and yesterday was the right time to move on. Brady is offcially the man to keep the train rolling into the future. LETS GOOOOOOOOOOO!!

The #Patriots got a top-end second round pick for a backup QB that’s started 2 career games. Take out the bs we were sold about his value last offseason. It’s a decent return.

If you liked what you read check out my website at jakescearbo.com to read more pieces by me!