What the hell happened on that overturned TD play?

Jets tight end Austin Seferian-Jenkins appeared to score a touchdown that would have made it a 24-21 ball game, but the call was reversed and ruled a touchback after it was determined he fumbled the ball and didn't fully regain control after he was out of bounds.

It has become the most talked about call so far this season, and of course, everyone's got an opinion on it. The consensus from the armchair refs is that the Jets got royally hosed. And honestly, after having to listen to Harry and Lloyd explain it on the CBS broadcast, I really can't say I blame anyone for thinking it was a bad call.

But by rule, this was the right call, although I think it's stupid. Tony Corrente, who was the lead referee in yesterday's game, explained why the call was overturned. 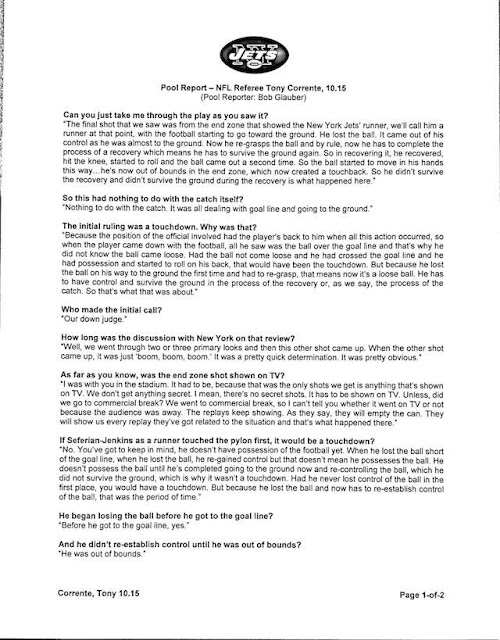 This is the best angle of the play I could find.

Jets TD reversed to a touchback after this is ruled a fumble out of the end zone. What a weird play pic.twitter.com/6nyHgbNCq3
— Pete Blackburn (@PeteBlackburn) October 15, 2017


You can clearly see Seferian-Jenkins loses control of the ball, but the rest of the play is where it gets weird. He is regaining control on his way to the ground, but as the ball is crossing the pylon, he's still trying to full secure it. It isn't until he lands out of bounds that he has full control of the ball, which was why it was called a touchback.

Again, right call by rule, but it's a very strange one. To me, I thought there was enough there for the original call to stand. I've never been a huge fan of a player having to maintain full control of the ball to complete a catch. If the ball hits the ground, that's another story.

The controversy surrounding this play should be enough for it to be a big topic of discussion during the NFL owners meetings this upcoming offseason.

But for now, it is what it is - the Patriots got the better end of it, and that's what their fans should care about.